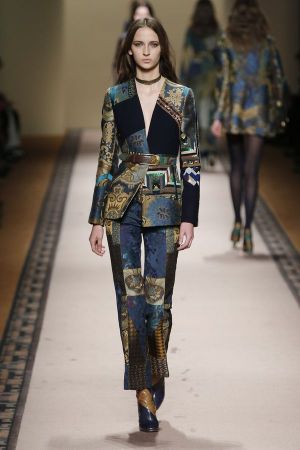 by Maria Cristina Pavarini — March 03, 2015
Milanese girls love bold fashion, bright color clashes, minimalistic essential silhouettes, inlaid furs and fur-trimmed coats, and bright pastels. These are some of the trends that emerged from the last edition of Milan Fashion Week held from 25 February to 2 March 2015.

The atmosphere was generally positive and busy, and some shows evidently more crowded than in past editions. Though according to insiders less foreign buyers were around, despite the great quality, research and innovation level pervading the shows.

Minimalistic silhouettes and geometric patterns – often inspired by the 70’s - are key for the season, especially when reinvented in sleeveless coats, often completed with fur details (Marni, Fendi), or in leather total looks (Trussardi).  Slit skirts, long a-shaped dresses, either in brown, metallic and skin tones or in geometric bold graphics (Ferragamo, MSGM, Versace) and patchworks (Etro). Fratelli Rossetti redesigned an own archive boot from the 70’s in a whole collection of bicolor shoes and boots. Fur coats are reinvented into precious inlays, geometric motives and graphics as seen at Ermanno Scervino, MSGM and Etro. Giorgio Armani also presented a long rounded blue and white fur skirt as soft, ethereal and cuddling as a cloud.

Unexpected color clashes were strongly hyped as, for instance, seen at Emporio Armani, who mixed purple and red in his whole collection and at Iceberg, who reinvented fluo hues buy mixing them with quieter hues and tweeds by adding fake orchid application and plastic elements for a modern sci-fi inspired collection.

Pastels were omnipresent, be it in dusty or bright variants. Prada, for instance, opted for bright pinks, blues and mustard and added details such as pleated ribbons and crystals. Antonio Marras, whose collection paid homage to iconic model Benedetta Barzini, opted for dustier colors and mixed crystals with laces and volants appliqués.

Other clear directions were set by Moschino, who reinvented sporty elements with glamour chic ideas – be them bright colors such as yellow and electric blue, mesh and functional elements in chic outfits. Dolce & Gabbana played with the idea of motherhood by presenting reassuring though ironic mother’s outfits, and decorated some silk dresses with kid’s handmade drawings, or statements such as “You’re the most beautiful of the world”, “Mommy you’re the best” and similar slogans.
Also new were some outfits that might be thought for evening wear but can be worn every day for office hours as presented by Dondup that mixed leather perfectos with tulle long skirts or added golden decors. Giorgio Armani also launched a new trouser model that on top looks like a wrap-up skirt.
The talk of the show was Gucci’s new direction. The new collection designed by Alessandro Michele, who had already astonished with his first menswear collection has continued insisting on unisex and genderless fashion, though, according to many insiders, opted for a too relaxed, democratic and street-minded collection. Still, the collection did not miss luxury touches as mink cuffs were applied to army jackets and rich embroideries added onto grey sweaters, though many didn’t appreciate how, for instance, models instead of wearing the renowned moccasins or glamorous boots opted for fur-lined slippers and shoes.