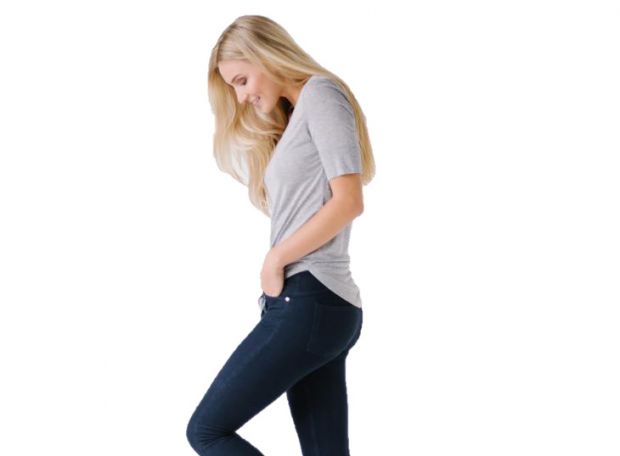 Invista's survey: Every woman owns 8 jeans, but shopping them is stressful

During the last editions of Kingpins Amsterdam and Kingpins New York (October-November 2016), Invista has presented the first results of a survey on women’s jeans consumption, expectations and difficulties when purchasing jeans.

The study was carried ahead among about 2,500 consumers from the main denim markets worldwide - USA, China, Germany, Spain and Brazil. They interviewed 18-49-year-old women who had purchased minimum a pair of jeans in the last six months and wear the popular denim cloth at least once a week. Aim of the survey was to learn what role jeans play in women’s wardrobes, how they feel when purchasing them and what they need or miss when buying denim.

Eight pairs in each wardrobe – and Brazilians go for more!

The study discovered that women own an average of eight pair of jeans. Despite this, Brazilian consumers own 9.3 pairs each, followed by US and German ones who own 8.5 pairs each. While counting in which market consumers own more than 10 jeans pairs, once more Brazilians showed how much they love denim as 38% of them (the highest rate among all five markets) owns such quantity of pairs. 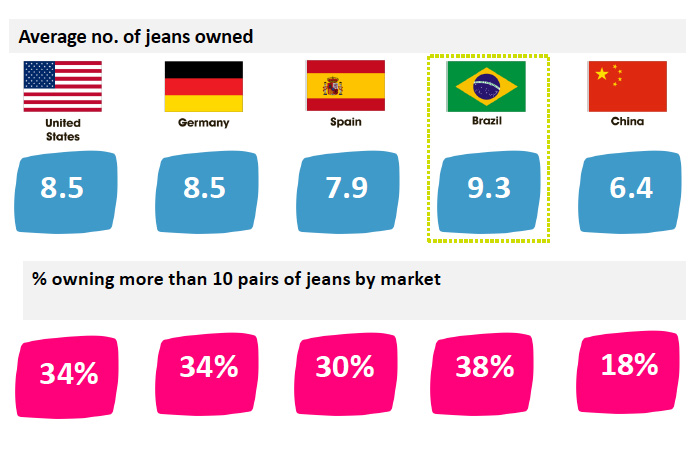 Denim for every hour

Consumers showed how often they like to wear jeans even if differently from country to country. According to the majority of interviewed people most of them wear jeans when running errands (Germany showed the highest rate with 93%), going out at night (Brazil counted for 84%) or for a dinner (Germany for 84%). When referring to who wears them during working hours there are different perceptions. For US and Chinese rates are relatively low as they wear them for respectively 51% and 56%, while all other markets register higher levels (German people wear them for 84%). At the opposite level, when asked if they wear them at home, the lowest level was registered in Spain and Brazil (respectively 25% and 31%), while for other markets at over 60%.

What fit are you in?

When considering which fit women prefer the result is very clear as the average result shows they like most slim fit (29%) also confirmed in Spain, Germany and China, while the US prefers skinny and Brazil opts for straight.

Despite women wear and buy quite a lot of jeans, they generally feel frustrated when buying them. A common answer they gave was: “It’s difficult to find jeans that fit well all over,” meaning that they hardly can find jeans that fit well around waist, hips, bum and legs - just to name some of the most “critical” parts - all at the same time. Brazilian women appear to be the most frustrated consumers, even though also unhappy about what can be found in the market are US and Germany as their general comment was “I find it difficult to find what style best suits my figure”. 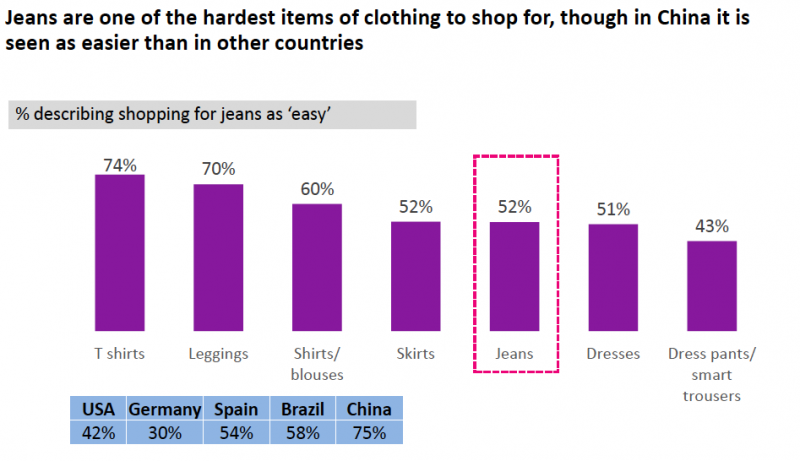 Less unsatisfied about what is offered, instead, appear to be Chinese women. Even if the average result about how “easy” buying a pair of jeans was 52%, Chinese answers showed to consider it as an easy task for 75%. They are the most enthusiastic about it as they perceive it as a very positive experience – they’re far more likely to describe it as enjoyable (48%), exciting (22%), easy (22%) and inspiring (21%).

What women do when they can’t find what they want?

When they cannot find what they want, 43% of them simply end up buying the best most similar type of clothing they can find. Reacting in a totally opposite way are 42% of them who prefer not to buy anything – with German consumers most likely to do so (62%) and Chinese ones less likely to do it (21%). The remaining 15% of the sample rather looks for an alternative type of clothing – and most often end up buying a pair of leggings.

Purchasing a pair of jeans is strongly tied to emotional aspects as women often consider a pair of jeans that fit them well as a very important ally. For instance 72% of the interviewed people think: “I have my favorite pair of jeans and I’ll be devastated when they become unwearable”. Another 58% retains that when finding the right pair they will have to pay a bit more, while others believe that good fitting jeans are really expensive (62%).

Summing up: appearance and comfort are key

Summing up, when consumers want to buy a pair of jeans they are influenced by a broad range of factors - a total of 12. Above all what counts more are appearance and comfort, with fit playing a greater role in US and Germany.

Invista also asked consumers who wore jeans made with Lycra Beauty fabrics with the following result: “They are the first pair of jeans I’ve worn till the end of the day without the knees losing their shape” and others said: “These jeans are flattering and fit in all the right places.” Wearing jeans that don’t lose their shape and make who’s wearing them at ease and beautiful are key factors brands and companies have to take in consideration more and more for the future.