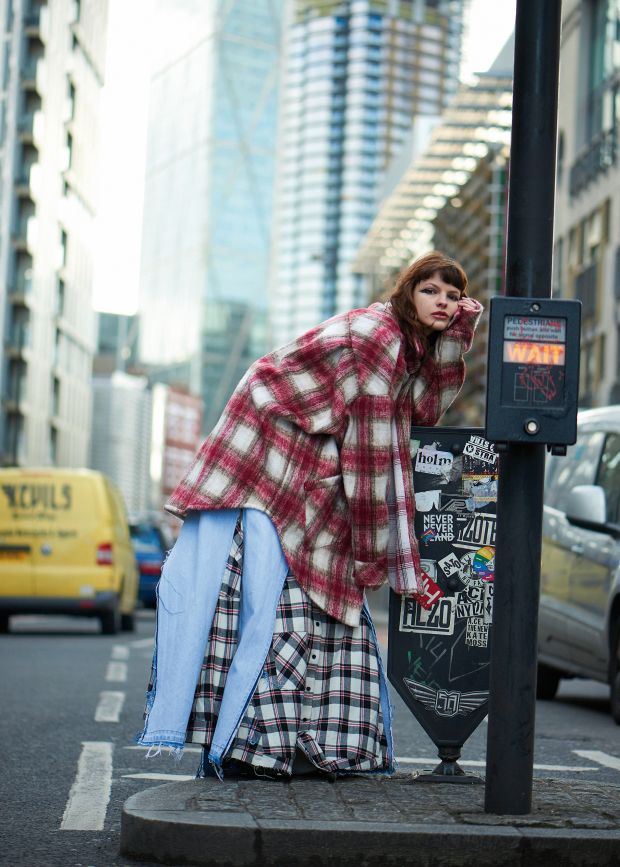 The thrifty art of upcycling

by Emma Holmqvist Deacon — April 16, 2020
In the age of Greta Thunberg, deadstock has a decidedly zeitgeist-y ring to it, and so too the thrifty art of upcycling. The circular concept of mopping up leftovers–be it never-used rolls of denim or pre-loved garments–is increasingly embraced by the new generation of eco-minded brands, as well as more established ones. Givenchy’s family of upcycled jeans was a s/s ’20 hit, and Marni’s repurposed f/w ’20 creations–pieced together with decades-old, contrasting remnants–have garnered much attention.

Brands flying the landfill-reducing flag in London include Ahluwalia Studio, Duran Lantink, Vinti Andrews, Studio Alch, Bethany Williams, Elv Denim, and, of course, [Christopher] Raeburn–who’s worked with surplus materials since launching his very first collection in 2009. Over in Scandinavia, Rave Review is making waves, along with Iggy Jeans, Avavav, (Di)vision and Jeansverket. “Using deadstock is a great way for responsibly-minded designers to get started as it utilizes waste, and it also gets around the tricky minimum order quantity (MOQ) issues smaller brands face,” notes Janelle Hanna of White Weft denim consultancy.

Aside from its obvious eco-credentials and MOQ advantages, the use of deadstock seems to spur designers to higher levels of creativity while also stirring excitement among consumers with a penchant for “drops.” “I really enjoy designing within limitations, so working with a material that may only have a specific quantity remaining really opens up the possibilities for design,” says Studio Alch designer Alexandra Hackett. “It also adds an exclusivity element to the pieces, as once the fabric is used, it most likely will not be reproduced.”

Linda Friberg–co-founder of Monki, Cheap Monday and Weekday– uses deadstock exclusively in her new Florence-based fashion venture, Avavav. She likens the process to the sustainable cooking ethos of using seasonal ingredients. “I develop my designs according to the leftover materials I can get my hands on at any given time,” says Friberg. “Some might call it restrictive but to me it’s highly creative–everything starts at fabric-level and develops from there. Our working with deadstock in small quantities allows us to issue continuous, limited releases rather than seasonal collections. This makes sense environmentally as it reduces overproduction, but it’s also a way of adapting to consumer demands and the increasing thirst for newness.”


THE HOLY GRAIL OF DEADSTOCK DENIM
As for deadstock denim specifically, rolls from the 1960s and ’70s are particularly covetable, though these are notoriously difficult to get hold of. “If you’d manage to find any leftovers from the Lancashire mill Smith & Nephew I’d call it purebred deadstock, and the same goes for anything from Cone Mills White Oak factory,” says Chris Hewitt of Hewitt Heritage Fabrics and vintage showroom Somebody & Sons. Being a denim purist, Hewitt’s definition of deadstock is stricter than the term’s newfound, wider meaning. “In my opinion, true deadstock has to come from a mill that has closed down, meaning you’ll never find fabric by the same company again–otherwise it’s just surplus,” he notes.

Hewitt himself has some prized deadstock jeans in his London-based vintage showroom. “These are definitely made from denim woven in the UK in the 1960s,” he says, showing us a small pile of jeans with the tags still attached. “The color is very English–it almost has a royal blue hint to it.”

DEADSTOCK SOURCING PITFALLS–AND SOLUTIONS
Sourcing deadstock–whether denim or other types of never-used, abandoned fabrics–can be fraught with complications. Even finding it can be a challenge. “It took a lot of searching before we managed to track down an Italian factory offering very limited leftovers from high-end, conceptual designers–sometimes we only get our hands on an off-cut, other times we get a few meters,” says Simon Wick, co-founder of freshly launched Copenhagen-based brand (Di)vision, which uses both deadstock and secondhand denim to create unique pieces. London designer Duran Lantink works with prestigious retailers–H. Lorenzo and Browns included–to source ingredients for his distinctive haute street concoctions. His latest offering also includes a range of imaginatively reworked Lee jeans, supplied by the brand directly. “I get to work with damaged pieces that stand no chance of being sold or donated,” explains Lantink. “In the past, brands and retailers were quite secretive and unwilling to pass on deadstock for others to use, but luckily the tide is turning.”

As for bigger brands claiming to use deadstock for whole collections, Hanna has authenticity concerns. “When it’s limited to very small-scale production, I’m sure it’s genuinely deadstock, but greenwash alarm bells start ringing when you find it mentioned in larger quantities. Bigger, more established businesses need to be doing more than exploring this concept if they’re really serious about sustainability, and my concern is that it’s actually not genuine deadstock in the first place,” she says.

Speaking of rolls of fabric specifically, it’s not always easy to establish if the yardage on offer at mills and wholesalers is genuine deadstock. By buying deliberately overproduced material marketed as deadstock, brands–however well meaning–end up unwittingly feeding the monster that is overproduction. And there’s of course another element to consider– if a supplier has genuine deadstock to offer, is it leftover only because the brand that ordered it originally has rejected it due quality concerns? Tackling all these questions, three-year old digital platform Rekotex/Fabric Resource Sweden AB sources top-grade surplus fabrics directly from Scandinavian brands known for their responsible practices. “So much leftover material, originally ordered by big brands, is lying around in mills, still wrapped in plastic,” notes company founder Marie Jonsson, a Swedish School of Textiles alumna with a degree textile economics. “Speaking to brands about the surplus problem, it was clear they wanted to find a use for it, but they had no strategy as to how they’d sell it on,” says Jonsson. “Meanwhile, small brands struggled to get around the minimum order quantity issue. This inspired me to set up a platform facilitating the process for both parties, acting like a practical go-between between seller and prospective buyer.”

Nudie Jeans is one of the names Jonsson collaborates with. “Nudie Jeans have worked sustainably since they launched in 2001. They always take care not to order too much fabric, but by giving a second life to leftovers, however small an amount it may be, they’re adding another layer to their circular approach,” notes Jonsson.

Being a wholly digital affair–the fabrics remain in place at the mills, including Berto and Bossa, until an order is placed and fabrics are dispatched. Taking a proactive approach, Jonsson sends out e-mail requests to her network of buyers and sellers for specific types of fabrics so that that deadstock can be used where possible, preventing a brand from having to place an order for new fabric to be produced. 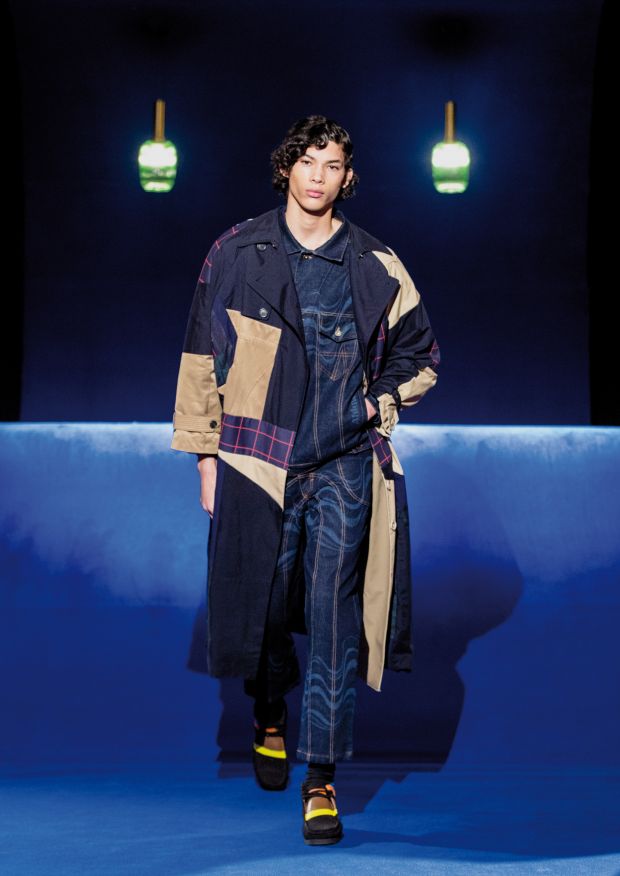 Photo: Dominika_Scheibinger
Leftovers reimagined by Ahluwalia Studio for f/w'20
UPCYCLING AND ITS LAYERED NATURE
The sourcing of vintage jeans for upcycling is generally more straightforward than the seeking out of authentic deadstock, and it provides designers with endless creative scope. In the hands of Priya Ahluwalia of London-based menswear label Ahluwalia Studio, vintage jeans are dissected and reassembled into new pieces that retain the soul of the original garments, yet in new, compelling ways. “Aesthetics and desirability have to come first in a product,” explains Ahluwalia. “It’s important that high quality materials are being used so that the final product doesn’t look old or disheveled. I always think of ways to keep reworked pieces looking fresh, not tired.”

Referencing the artwork of British textile designer Barbara Brown, Ahluwalia Studio’s f/w ‘20 collection certainly looked new. “Attempting to incorporate Barbara Brown’s swirly shapes within my signature cuts, I used laser to etch the shape in the denim,” explains Ahluwalia. “It gave the jeans the appearance of being bleached, but no chemicals were used whatsoever, of course.”

Vinti Andrews, another London-brand celebrated for its inventive take on upcycling–an art it’s been perfecting over the past ten years–favors the type of denim most wouldn’t go near. “Designers on the lookout for vintage denim tend to seek out grade A or B, while we ask for grade E or F–the dirtiest, most horrible denim available that no one else wants, and preferably from the ’80s,” says Paul Andrews, who runs the brand with his wife Vinti Tan. “By sourcing denim that’s been worn to death by some builder, mechanic or painter we get to work with fabric that has a real story, which we’ll inject with a new lease of life.” 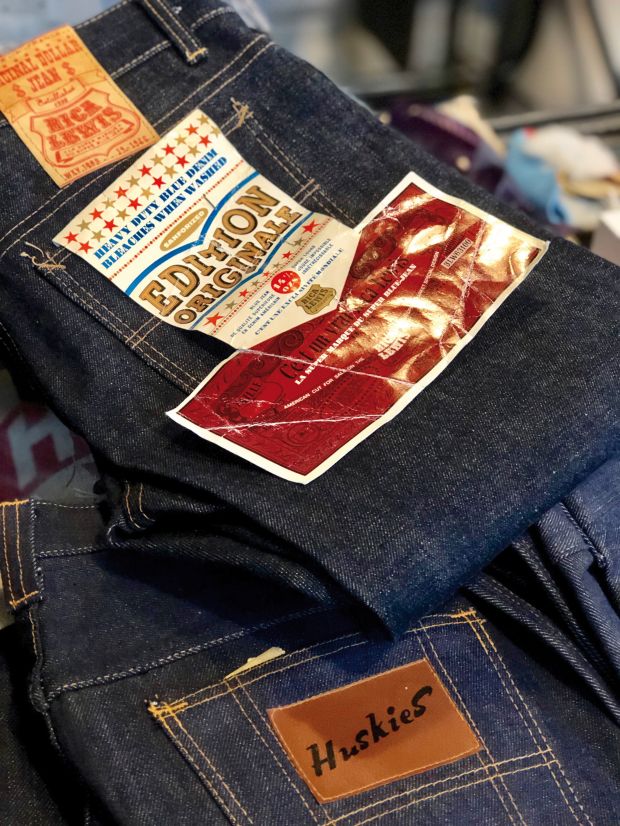 Photo: Emma Holmqvist Deacon
Vintage deadstock jeans from Somebody & Son's collection
Most designers we’ve covered in this feature only single out jeans that have been refused by sorting facilities and therefore destined for landfill. In many cases, “healthy” sections of damaged jeans–which stand little chance of ever being worn as is–are rescued and combined with other parts. Yet, critics of the remade denim movement often ask: why tamper with a pair of jeans that could have been donated to charity? “There are metric tons of vintage and deadstock clothing just sitting in warehouses not being used,” stresses Ahluwalia when faced with this question. “I have seen it with my own eyes–there is more than enough denim to go around, and charity shops actually only keep a very small percentage of what’s donated.”

Putting a positive spin on the jazzing up of old jeans from another angle, Palle Stenberg, CEO of Nudie Jeans, observes that it helpfully changes consumer perceptions, in that it highlights the value of secondhand product. “A pair of upcycled jeans cost more than a new pair, underlining the fact that old doesn’t mean worthless–quite the opposite,” he notes. 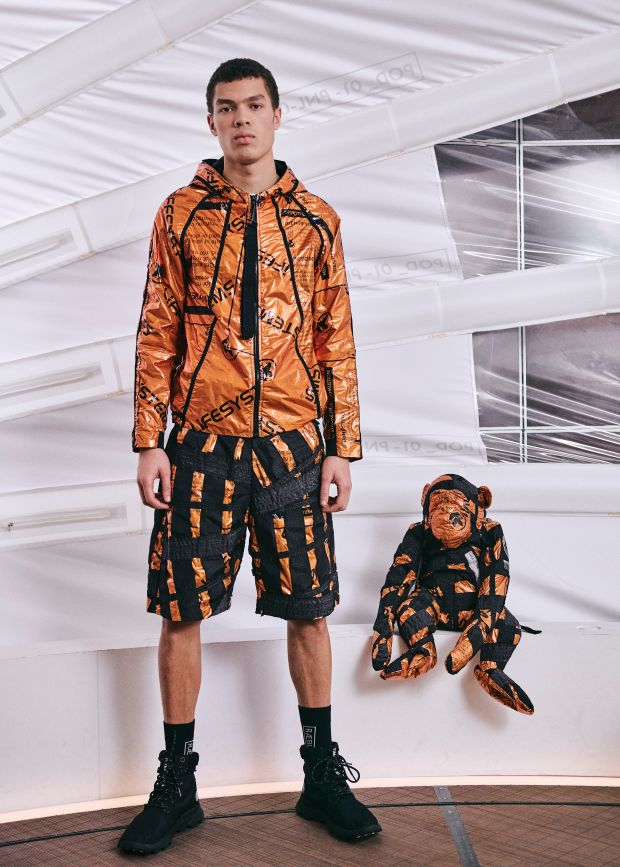 Photo: Raeburn
Raeburn s/s'20 remade look, crafted from space blankets and parachutes
THE FUTURE POTENTIAL AND RETAIL RELEVANCE OF LEFTOVERS
Circular fashion continues to burgeon across the industry. More and more brands try to utilize what’s around, fashioning new wares using remnants from their own previous collections–66°North and Pringle being two examples–or surplus sourced elsewhere. The increasing use of deadstock and upcycled materials–denim and otherwise–is not only starting to impact consumer attitudes, it also has the potential to shake up the retail system. “Retailers have to get used to the way the new wave of young designers are working,” says (Di)vison’s Wick. “There will always be an element of surprise to fashion created from remnants. As a designer, you’re not sure what materials you’ll be working with, and buyers have to accept that they might not always be able to order a specific color,” notes Wick. “This type of fashion bridges the gap between luxury and secondhand, and the fact that it’s produced in limited runs or even one-offs adds to the appeal.”

Hackett stresses the importance of educating consumers for this breed of fashion to continue to flourish. “In order for it to continue gaining momentum, it’s important that both brands and retailers communicate the concept clearly to consumers, making sure everyone understands how important it is to the industry.” Early surplus adopter Christopher Raeburn, who runs Raeburn while also serving as Timberland’s creative director, believes the use of leftovers has the potential to close the loop and change the whole system for good. “Deadstock as a resource is a fantastic business opportunity,” says Raeburn. “The good news comes in its abundance and affordability, so it really is accessible to everyone. The key is to be creative and utilize it in a meaningful way. The opportunities are endless, with the potential to impact all areas of the industry, right through to retail.” 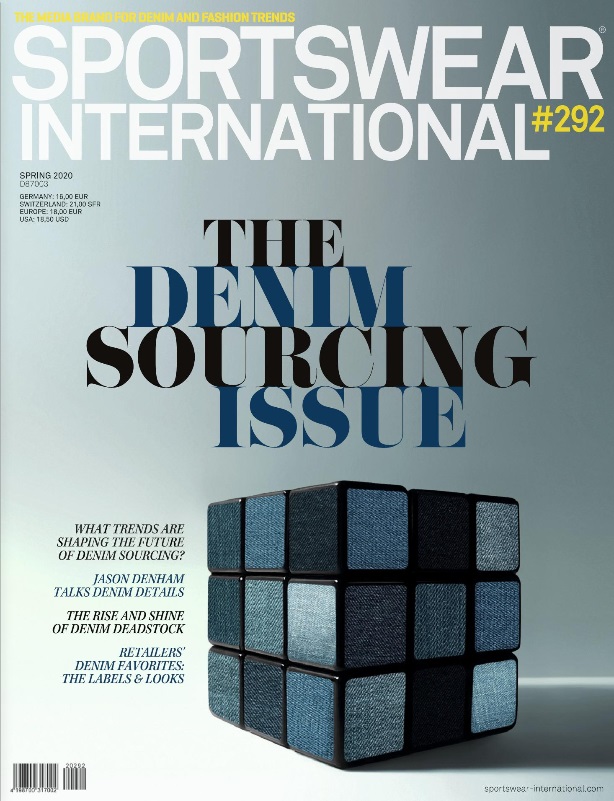 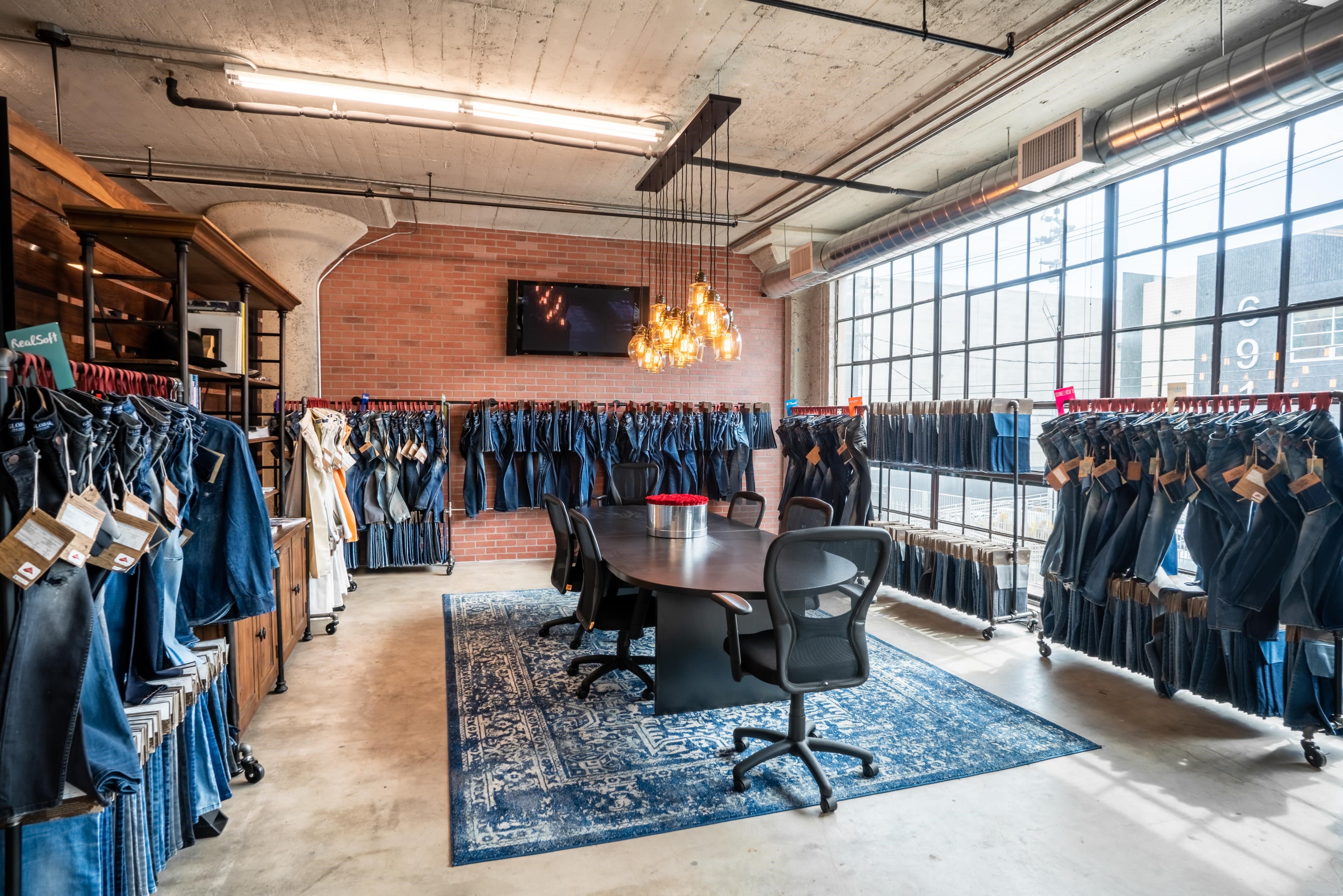 Denim Made in Mexico: Run for the border 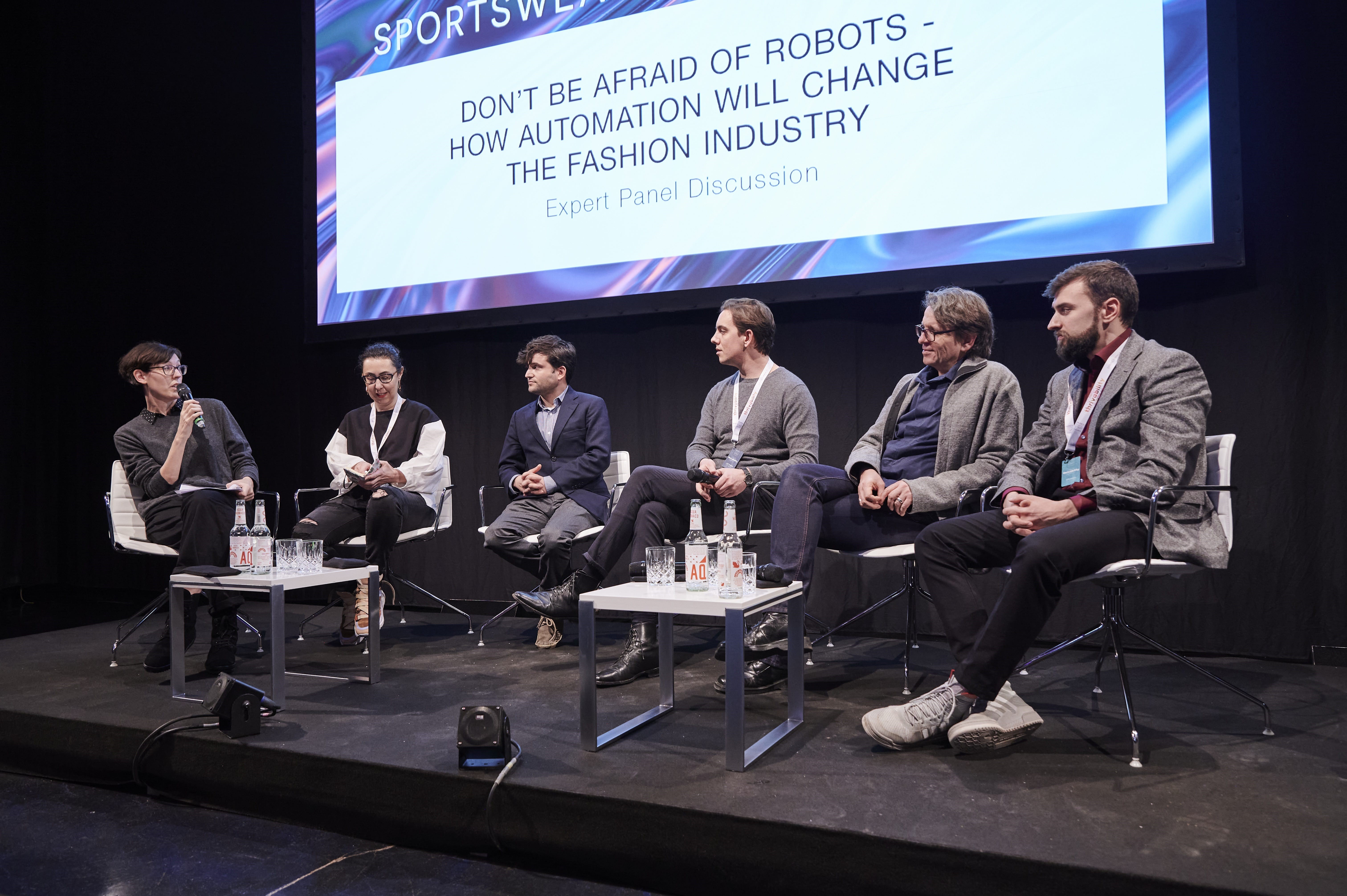 Who is afraid of robots? 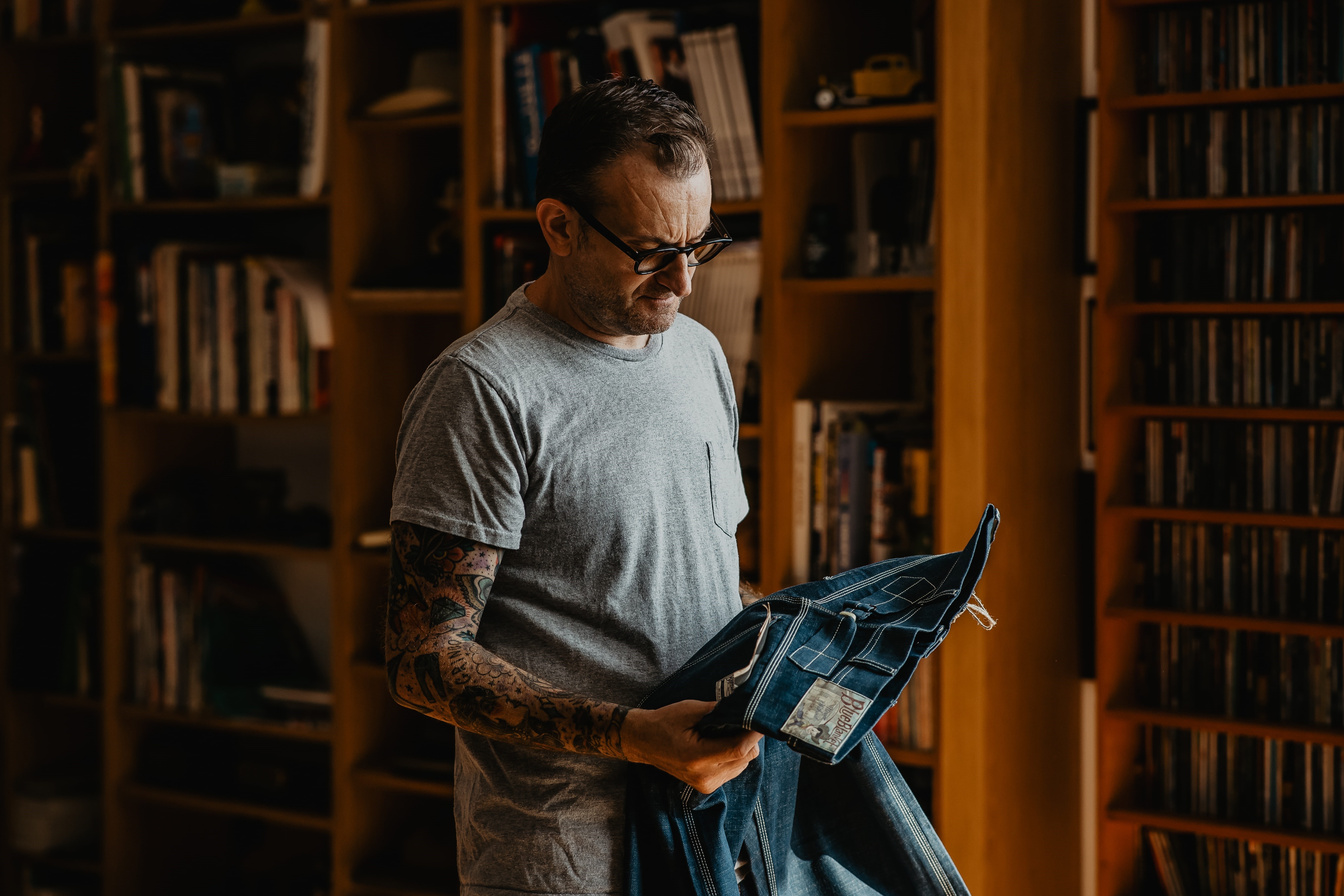