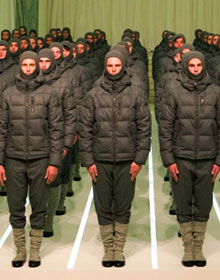 — September 16, 2008
American menswear designer Thom Browne is hitting the slopes. Best known for his precise constructions and for democraticizing the cropped trouser leg in men’s fashion, Browne has been named creative director of the new men’s version of Moncler’s critically acclaimed, upscale Gamme Rouge line. Moncler Gamme Bleu by Thom Browne will debut in January 2009 during Milan men's week, following the much anticipated debut of Browne's own collection at Pitti Uomo earlier in the month. “The great success of Moncler’s D’Angleterre collection for men, with its vast range of Shetland wool, British tweed and traditional English wools, has helped us to explore a different facet of the quilted jacket,” said Remo Ruffini, Chairman of Moncler, recently. “Here, we are offering men the strategy of difference that already acts as the defining feature for the women’s range with Gamme Rouge.” Browne, one of the most influential menswear designers working today, continues to design his own collection and the Black Fleece upscale label for Brooks Brothers.