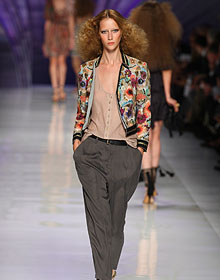 MILAN WAKES UP FOR FASHION WEEK

— September 29, 2009
This season Milan Fashion Week, Sept. 23-30, offered international fashion insiders with previews of the S/S 10 women’s fashion collections. The event hosted 200 collections, 90 of which were presented in fashion shows. Expecting about 15,000 buyers and 2,500 journalists, city organizers also hosted a series of cultural and lifestyle side events and encouraged stores, restaurants, bars and museums in the city center to remain open until late at night.

On Thursday, Sept. 24 C’N’C presented its fashion show at a prestigious location – the city’s central square Piazza Duomo, in front of the magnificent gothic cathedral. The aim was to begin the process of democratizing fashion events inside the city.

Feminine and sexy, though never too provocative, are some of the key words that characterize s/s 10 womenswear in Milan. Short skirts and high heels are musts, as presented by Giorgio Armani with his short dresses decorated with Bauhaus motifs. Gianfranco Ferré offered short cocktail dresses made with ultrafine organzas and plissé chiffon in nude and sandy tones with gold touches, while crystals covered neoprene mini-dresses, bathing suits, bags and shoes throughout the Prada collection.


Transparency juxtapositioned with bold lingerie was everywhere, as were shorts and bustiers worn as outerwear. Antonio Marras, Sportmax, Dolce & Gabbana and Ermanno Scervino were some of the collections that focused strongly on this theme.

Long shirts and leggings were the new must-haves at Marni, where striped leggings were mixed with dotted silk dresses and stylish art deco motifs on knitwear tops.

Prints also played a significant part for various collections such as Krizia, Pianurastudio, Sportmax and Prada – either as a negative (as Prada did with its chandelier images) or with trompe l’oeil effects. Etro, focusing on flower printed silk romantic dresses, completed some of its styles with short padded jackets and floral embroidery. Marni also presented some matelassé effects — A-shaped dresses sported flower and bubble effects.

Denim was not one of the strongest trends for the season. Only D&G revamped the western chambray shirt and modern cowgirl looks, while John Richmond opted for punk revivalist torn black denim leggings. Pierced leather styles characterized Byblos with its reinterpretation of punk styles.

Among the young emerging talents, Cristiano Burani (no relation to Mariella) presented a series of innovative clothing, such as an A-shaped dress in tulle-like fabric adorned with red paillettes made from laser-cut rigid silk organza and recycled newspaper.

The overall provocative collections in Milan yielded an equally provocative response by the International Herald Tribune's fashion editor, who suggested that several "saucy, sassy and sexy" outfits from the week might be a better fit for Italian Prime Minister Silvio Berlusconi's party guests. Unamused, Mario Boselli, President of the Italian Chamber of Fashion, said: "In days like these, it sounds more like an attack on the whole Italian fashion system rather than sincere criticism. I think that we did not deserve such a comment."