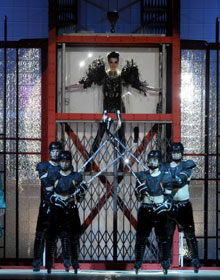 — January 26, 2010
Milan’s four days of menswear shows for the FW 10-11 ended on a strong note, with sport-lifestyle and military inspirations and functional pieces in mixed fabrications adding up as the key trends for next winter. Knitwear also played an important part, thanks to new product mixes, treatments and silhouettes.

Emporio Armani, while announcing its new partnership with Reebok International and the launch of its two new sneaker collections, EA7/Reebok and Emporio Armani/Reebok, concentrated on modern sport outfits inspired by 80s black and florescent yellow and electric blue contrasts and silhouettes à la motocross-meets-ski with ribbing and padding at the knees, elbows and shoulders on body-conscious apparel pieces.

D&G focused on mountain down-jackets in mixed fabrications, with Nordic jacquard motifs in knitwear blended with thick scarves and sweaters.

Splatter hockey was one of the main source of inspirations for DSquared with its models dirty with blood and Tokio Hotel’s Bill Kaulitz walking the show, while sport icon David Beckham presented the Adidas capsule collection ObyO co-designed with Undefeated L.A.’s James Bond.

Designers also reinvented knitwear for the fall. Z Zegna and Jil Sander opted to deconstruct items with asymmetrical results and other outstanding designs. Giorgio Armani gave free rein to the imagination and offered jacquard trousers and tight-fitting tops to tie-dye cardigans. Morello played with oversized long-striped sweaters. Pringle of Scotland reinvented Argyll using rubber print techniques. Mixed fabrications and weights was the concept behind John Varvatos’s knitwear, as part of his vision of multipurpose modern menswear. Knit jackets could be worn under the blazer during the day or worn outside when it’s time to chill out. Most innovative was Costume National, which offered molecular knitwear, or a special woven fabric that thanks to nanotechnology, was treated to incorporate cable stitched knitwear.

Burberry focused on military styles with a twist. High-collar aviator jackets were completed with visible belts and worn inside out with lamb fur on the outside. Gold buttons were creative director Christopher Bailey’s main idea this season. Almost every coat or jacket carried them, and in some styles, knit shoulders and coats cuffs were fully covered with brass buttons.