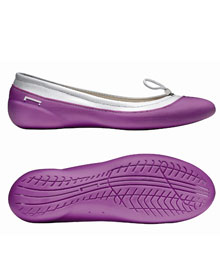 — September 22, 2009
Organizers of Micam, the international footwear fair held Sept. 16-19, 2009 at Milan’s Rho-Pero Exhibition center, have published the show’s final attendance figures. The show registered 39,857 or 4% fewer visitors compared to a year ago, with foreign visitors accounting for 20,644 attendees, down 2.3% from 2008.

“The creative and productive capacity of participating companies remain the main attraction of this event for recalling buyers,” insisted Artioli, adding, “We will focus on find new opportunities to better develop our trade show format.”

Significant was the presence of visitors from Spain, France, The Netherlands, Greece and Japan. There were fewer Russian buyers than at the previous editions, however, because the OBUV show in Moscow was running concurrently from Sept. 13-16.

Meanwhile, the number of exhibitors remained stable at over 1,600, 600 of which were foreigners, compared to the previous editions. The number of foreign exhibitors also remained about the same from previous shows.

Technology was certainly a focus at the trade show, where organizers unveiled a new iPhone application developed by ANCI, which enables users to customize styles for sale over the phone. The application will be available through the Apple Store by the end of September.

On a trend note, spring/summer 2010 was characterized by three main trends: Urban chic marina, bio trendy gardening and techno-romantic. Nautical with a twist was Voile Blanche. It presented styles such as faded blue-white and red-white striped high-heel shoes. Blue leather ballerinas were cut with lace-like motifs, while other black and white macrame-lace ballerinas completed the offer. The brand also offered a series of basic sneakers in satin, suede and nylon at about prices 30% lower than their average top collections. Colors of California and Bensimon focused too on nautical-style moccasins; similarly Starry, an Italian historical sneaker brand from the 1980s and resurrected by the shoe specialist Mirella, showed lacquered uppers and faded blue canvas uppers with marine-inspired patches.

Bio-trendy gardening was hot with checked uppers and green motifs. This trend best describes El Naturalista’s offer. The Spanish eco-friendly collection whose shoes are made with recyclable materials offered high-heeled rubber shoes, clogs and sandals inspired by vegetal-inspired decorations and colored rubber soles in purple, brown and beige variations. Also hot were bright tri-colored uppers, for instance, with yellow and blue hues. Meanwhile, Bensimon’s new agreement with British fabric specialist Liberty has resulted in a series of basic sneakers whose uppers are made with smart floral-printed cotton fabrics.