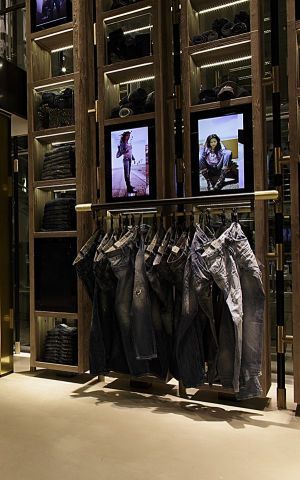 by Maria Cristina Pavarini — June 13, 2011
Meltin'Pot has opened its first flagship store in Italy, Riccione, at the beginning of June, as part of a new store concept debut and a monobrand opening strategy.

Arranged on two levels, the store is located within the Palazzo dei Congressi di Riccione complex (Palariccione) in Riccione, an Italian and international tourist prime destination on the Adriatic Sea, especially known for its clubs and nightlife, most attended all-year-long by the young crowds.

This pilot flagship store is the first example of a Meltin'Pot denim store focused on jeans, and houses the brand's complete denim collection for men and women. All fittings and furnishings embrace a "denim world" style, "raw" and industrial, using materials such as wood and steel often mixed with modern technology. A massive, “Meltin’Pot” lifestyle video wall structure transmits real time video content related to collections, advertising campaigns, events, all in cooperation with the brand's advertising agency ... Staat that has been collaborating with the brand and has been directing the ad campaigns for two seasons.

The first Meltin'Pot denim store is also marking the brand's new retail strategy - a pilot project that anticipates the forthcoming openings of additional Meltin'Pot stores both in Italy and worldwide. The company aims to inaugurate two more stores by the end of this year and 15 more by the end of 2012.

The Meltin'Pot flagship store in Riccione was designed by BAM Design, an architectural and design studio based in Milan and New York, already involved in the design of some key international fashion brands’ stores worldwide.