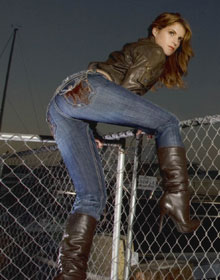 — February 11, 2009
MEK Denim is launching sportswear for men and women. The new collection, set to debut at Project Las Vegas next week, is said to capture the same sophisticated feel of its denim counterpart and will feature 10 to 12 styles for women and eight to 10 styles for men in classic silhouettes such as V-necks, crews, zip-mocks and hoodies. The moderately-priced collection will grow each season to include other non-denim product categories and a grouping for children.

“With the success of our denim, we felt it was the right time to introduce a collection that would complement our core business,” explained Kevin Chen, CEO and Creative Director of MEK, which also produces Voyage, a premium line, and Mekology, an organic collection. “MEK Denim has avid followers and now they will be able to enjoy an entire look.”

MEK Denim increased its sales by 178% over the previous year in 2008. Chen attributes the brand’s success to strategic planning and quality merchandise. Accordingly, the brand is currently working with SnL Communications and State of Tomorrow to boost its presence. Although an advertising schedule has not been officially announced, State of Tomorrow is said to be designing a brand campaign slated for release in the second half of 2009.

The company is also in the process of upgrading its corporate office to a 10,000-sq.-foot space in the heart of LA’s Art District.