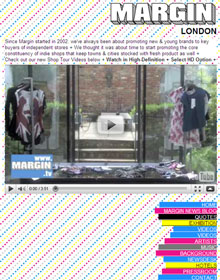 — May 27, 2010
Margin, the independent London trade exhibition, has turned its attention to promoting its core constituents of indie shops that keep towns and cities stocked with fresh product.

"Independent stores are a vital part of the retail landscape," said exhibition organiser Odysseas Constantine. "They're the stores that pick up on new designers first, at least two years before department stores and corporate multiples, and they bring excitement to shopping. After looking around online, I couldn't believe there wasn't a dedicated website promoting these forward-thinking boutiques in a credible or enticing way, so we're planning on launching a consumer-facing website later this year to promote these important shops to the public. In the meantime,” Constantine added, “the videos are working double duty on the Margin site as well."

The first wave of Shop Tour videos premiered on May 24 on Margin’s website, and plenty more have been planned in the following weeks. Stores featured in the first wave of Margin Shop Tours include a diverse mix of modern retailers including long-standing design emporium Sarah Coggles in York, streetwear merchants Urban Industry in Eastbourne and Chimp in Leeds, cutting-edge boutique Bespoke in Norwich, and Brighton retailers JuJu and Get Cutie. Additional stores adding some Spanish flavor include Bilbao's newest streetwear store Abricot and board wear mecca The Box in Vigo.

Margin is the longest-running independent trade show for directional men’s and women’s clothing and accessories in London. A proven successful hunting ground for key buyers & press to find new brands since the shows started over seven years ago, Margin is set to host its 19th edition in London this August.