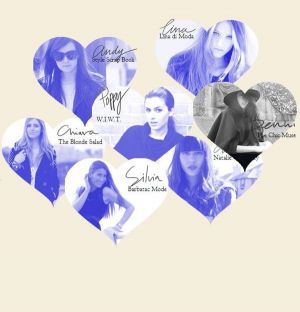 The initiative, which is divided into two stages, involves seven international bloggers: Nathalie Suárez from the US (natalieoffduty.blogspot.com), Chiara Ferragni from Italy (theblondesalad.com), Andy Torres from Mexico (stylescrapbook.com), Silvia García from Spain (bartabacmode.com), Poppy Dinsey from the UK (wiwt.com), Lina Söderström from Sweden, (linadimoda.freshnet.se) and Denni Elias from France(thechicmuse.blogspot.com).

During the first stage, starting today, March 22, in Mango's El Hangar design center in Barcelona, the bloggers are creating two looks that will be presented on the microsite mango.com/fashionbloggers (especially created for this), on Facebook and Twitter. The winner will be chosen by fans of the brand, who will have one week to vote for their favorite look. The winner of this first stage will receive €5,000 to be donated for a charity cause of her choice.

The second stage will take place in mid-April where each of the bloggers will be invited to a shopping night organized by Mango in their respective countries. There, they will be able to interact with customers and give them styling tips.

A camera team and a photographer will follow the bloggers throughout these two stages and will produce a final video that will be published on the microsite, mentioned above, on April 26. At this point, Mango fans will be again able to vote for the blogger they like best.

The name of the winner will be announced on May 3. The winner will receive €20,000 and will become the brand’s new ‘It Girl’ for the f/w 2011 season. She will also be invited to the fashion show that Mango is hosting each season to present the new collection.

Mango's first company website was created in 1995 and its first online store was launched in 2000. The brand currently has its own trend blog, Keep the Beat, as well as a strong facebook presence with over 1,700,000 fans. The brand is also active on Twitter with two profiles (twitter.com/Mango and twitter.com/HeByMango) and on YouTube with its own premium channel youtube.com/mangofashion.