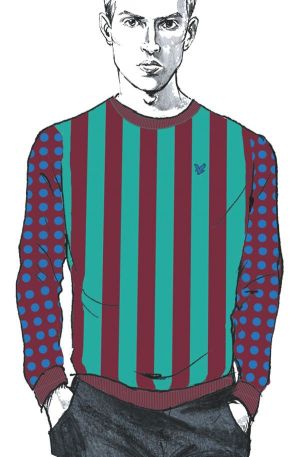 Sketch from the collaboration collection for F/W '14
Stories

The joint capsule collection for Fall/Winter 2014-15 is made up of 28 pieces and features Royal Warranted, Made in Scotland knitwear with Made in Italy merino wool mid-layers. The classic Lyle & Scott polo shirt, woven shirt, golf Harrington and two new footwear styles complete the collection. Each garment is branded on the chest with an eagle in one of four different colours, designating the collection to which it belongs.

Saunders has been hailed as one of the most exciting British menswear designers of recent years. He has won several talent awards including the Emerging Talent Award – Menswear at the British Fashion Awards in 2012. Having launched his namesake label in 2003, he initially established himself as a womenswear designer, followed by his first menswear collection debuting for the A/W 2011/12 season.