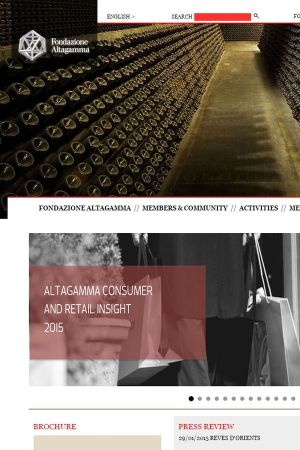 Luxury consumers to spend over a trillion Euro by 2021

With over 40,000 people interviewed in over 20 countries (and a focus on 10,000 top luxury consumers with average spending levels of €20,000 a year) and a total of 12,500 sales outlets, the survey presents a very broad and detailed study on luxury consumers.

The survey highlighted that there are 390 million luxury consumers in the world, who spent €755 billion in 2014 (also taking into account unbranded products). The total number of consumers is expected to grow from the current figure of 390 million to 465 million (almost +20%) in 2021, when they will spend €1,015 billion, around +34%.

This growth will be driven by 15 million top luxury consumers and, despite they represented just 4% of the total in 2014, they spent €220 billion.

The study also highlighted 12 profiles into which they were segmented, which showed a few changes compared with last year. For instance, 50% of purchases were made by the first three segments:  Absolute Luxurer (top spenders, refined and elegant connoisseurs who account for 24% of all consumption), Megacitier (globalised urbanites, trendy, 15% of total), Experimenter (lovers of travel, hotel and gourmet food experiences, 13% of total).

The segment that showed strongest net growth was Social Wearer (those attentive to social and environmental sustainability, 6% of total but twice as big as in 2013). The Megacitier segment is growing in China. Clothing is their major source of expense and mostly transitioning from formal to casual.  The Absolute Luxurers account for 22% of the leather goods and footwear market.

The elements common to all segments include the importance of manufacturing quality (‘Made in Italy’ remains the number one preference in the clothing, leather goods and jewelry segments, enjoying growth in USA and UK) and the importance attributed to the digital aspect, which influences 62% of all luxury purchases. The phenomenon of ROPO (Research Online, Purchase Offline) has grown, influencing 45% of purchases (2013: 38%), as has the omnichannel phenomenon: 3 out of 4 consumers want a brand that can be accessed through various channels. In China this figure is 9 out of 10.

In the favourite fashion hubs rankings, Milan has fallen from second to fifth place, while NYC has risen (from fourth to second). Among best ranked cities there are Paris (first), London (third) and Hong Kong (fourth).

The Altagamma Retail Evolution has highlighted how luxury brands have gradually transformed themselves into retailers. The analysis of like-for-like performances (without new openings) must guide retail investments. Hermes and Richemont have performed best in the last years. Burberry, Ferragamo and Moncler are the brands with the biggest development potential. Luxury brands are also reconsidering the retail presence of diffusion and young lines in light of the competition from fast fashion and mid-range retailers. Regarding accessories, the mega brands are abandoning entry price products in favor of accessible and premium luxury brands.