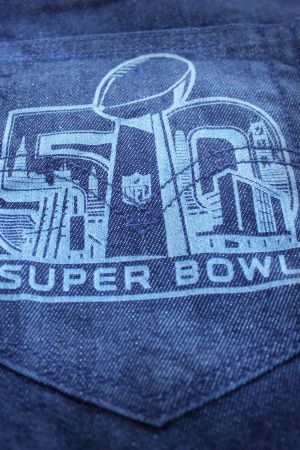 by Maria Cristina Pavarini — February 04, 2016
Super Bowl, the well-known US football game, will celebrate its 50th anniversary at the Levi's Stadium of Santa Clara in California this year. For the first time the Big Game will be played in the San Francisco Bay Area, the birthplace of this important American event. The final game of the National Football League championship will be held on 7 February, 2016.

Inside the Levi’s Stadium Levi Strauss will be located at the booth of the Levi's NFL Experience and will host Jeanologia’s Nano technology laser customizing machines. The teams’ supporters attending the NFL experience of the National Football League will be able to customize clothing with the logo of their favorite team thanks to Jeanologia, Spanish specialist in sustainable laser technologies for textile finishing.

The Super Bowl is a highly recognized sporting event reaching a record-breaking TV audience. The TV program also involves brands, entertainment, sports and culture. In 2015, it hit a record audience in television history by reaching over 114 million viewers.