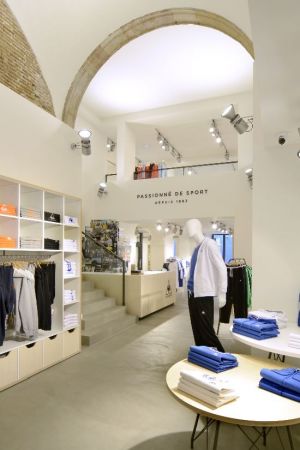 by Maria Cristina Pavarini — March 26, 2013
Le Coq Sportif (lecoqsportif.com), French sport-lifestyle brand founded in 1882, is celebrating its 130th anniversary with a series of initiatives including the opening of its first Spanish flagship store in Barcelona.

The newly-inaugurated store is based in Calle Boters 6, in the very heart of the Ciudad Condal. It measures over 350 sq. meters and occupies two floors. The store offers men's and women's apparel, footwear and accessories, in addition to their limited edition range inspired by The Tour de France (The prestigious competition for which the brand also provides official uniforms).

The totally white store has changing rooms decorated with red-white-and-blue mosaics - like the brand's logo - and was prized with the prestigious Rosa de Plata award.

After inaugurations in Paris and Milan, Le Coq Sportif want to further expand in Europe, and are planning to open another flagship store in London.