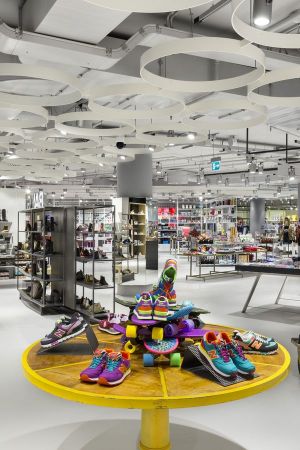 Inside the Annex store
Stories

by Maria Cristina Pavarini — December 17, 2014
Milan’s la Rinascente department store has opened its new Annex store in Via Santa Radegonda 10. The new space occupies two floors, all dedicated to teenage girls and is expected to open a third floor by February 2015.

The new area hosts make up on its ground floor. On its first floor it sells fashion shoes and sneakers, underwear and accessories such as, for instance, bags, backpacks, watches, bijoux, eyewear, techno gadgets and more cosmetics. The second floor – to be opened by February 2015 - will offer fashion and accessories.

The store also hosts a food area hosting Manuelina Focacceria from Recco, a most renowned bakery shop in Recco, known for its delicious signature cheese focaccia from Liguria’s coast and other street food specialties. The same area also hosts a bar and a cafe.

This new space can be entered from both via Santa Radegonda 10, or through La Rinascente’s main building on piazza Duomo.