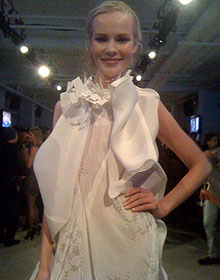 The Art of Craftsmanship Revisited
Stories

— February 19, 2010
It was a veritable meeting of great minds on Wednesday night as MAC & Milk Studios played host to “The Art of Craftmanship Revisited: New York,” an event co-founded by LVMH Moët Hennessy Louis Vuitton and Parsons The New School of Design.

Renaud Dutreil, Chairman of LVMH Inc. in North America, and Parsons’ Simon Collins and Sven Travis were on hand to toast, along with Selma Blair, Estelle, Carine Roitfeld, Rachel Zoe, Nina Garcia, Kelly Killoren Bensimon and Camilla Staerk, the culmination of a project that paired 23 teams of Parsons students each with a local master artisan. Over several months, artisans, ranging from fields as varied as architecture and ceramics to lighting and metal arts and clock-making, donated their time to teaching and demonstrating their skills to students in their own studios.

Students were then challenged to create original designs, which were showcased for the first time on models against a backdrop of film installations, free-flowing Moët and live tracks by Tadaaki Iwaki and Tetsuya Yoshioka. Dresses were refreshingly unique and provocative, following a week of dark, restrained catwalk collections.

The three winning teams from this year’s challenge will be announced and handed awards later this spring.