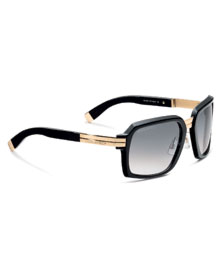 — March 11, 2009
The 39th edition of Mido, the Italian eyewear trade show, closed its doors yesterday, maintaining its leadership in the international eyewear market despite the overall market crisis. The event took place for the first time in a new timeslot – in March rather than in May as it has been traditionally for years – and as part of the “Made in Milano” series of Milan fashion events beginning with Milan Fashion Week at the end of February.

“The number of visitors is higher than what we expected,” said Dan Emanuel Levi, Vice-President Mido and Anfao (the Italian association of optical producers). “There were more than 42,000 with a 9% decrease only compared to 2008, but signs coming from the market are not so positive. Italian visitors have increased (+ 3%), while foreigners fell by about 18%, especially from Asian countries and especially because other fairs were happening almost at the same time.”

According to organizers, Mido is, once more, the leading fair in its segment, a key event for optics insiders, foreign buyers (54%) and Italian ones (46%). Considering the positive results, the fair’s management has also decided to keep the same timeslot for next year. The next edition of Mido will take place from Mar. 5-7, 2010, and run three days instead of four to better accommodate the needs of companies and buyers.

At this edition, creativity played no less of a central role, with many outstanding ideas on display for the S/S 2009 season. Technical innovations, curious developments and outstanding products drew the most attention at the show. Maui Jim, the US eyewear brand out of Maui, presented its varied collection of sunglasses complete with high-tech lenses that guarantee true-to-life color, thanks to special mineral substances contained in its lenses, and better visibility also in low light conditions thanks to special advanced technologies applied to the lenses.