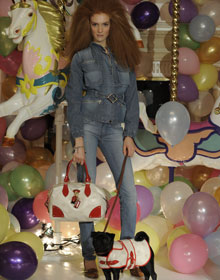 LONDON FASHION WEEK, ROUND ONE

— September 22, 2009
This year, London Fashion Week celebrates its 25th anniversary. The S/S 10 edition kicked off at Somerset House on Friday, Sept. 18 with an upbeat speech from London’s Mayor, Boris Johnson. Also forming part of the inaugural celebrations, super milliner Stephen Jones and the British Fashion Council served up Headonism, a live installation showcasing the new crop of young London milliners with names such as Soren Bach, J. Smith Esquire and Piers Atkinson at the forefront.

As a sign of the times, both reflecting the economic climate and the departure from catwalk shows as the only viable option, the schedule of 59 designers brought a vast number of presentations away from the runway. Mulberry, Aquascutum and Temperley were only a handful of the players opting to present their collections using alternative means such as intimate salon showings or video installations. Among the designers staying faithful to the catwalk formula, meanwhile, were the season’s three Fashion Forward winners Marios Schwab, Christopher Kane and Erdem.