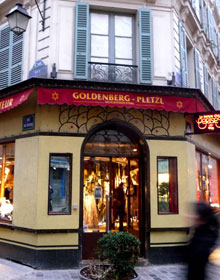 — March 12, 2010
Though the shop has been open for several weeks, the French brand Le Temps des Cerises officially celebrated the opening of its newest store in Paris’s Marais last Friday, with nothing less than a private rock concert. Rue des Rosiers, where the store is located, has changed a lot recent months. Following significant renovation to the area in 2009, big fashion retailers such as IKKS, Kokaï, C.O.S., Eden Star, Custo, Lee, Patrizia Pepe, Bill Tornade, Adidas and The Kooples have moved into the quartier’s former Jewish restaurants, falafel-diners and bakeries. The high fashion retailer, L’Eclaireur, despite being owned by a Jewish family, closed its famous shop last year, because of the commercial development of the street and relocated to the Haut-Marais. Le Temps des Cerises, however, is trying to keep alive the heritage of the neighborhood. Located in the historical Goldenberg delicatessen, the retailer kept the outside facade and signboards of Goldenberg and tried to create inside a gastronomic ambiance with a jeans bar, historic objects from the restaurant suspended from the ceiling, and vintage furniture from the flea market. “We wanted to respect the soul of the location,” said spokesman Nicolaus Faure. Covering 170 square meters, the store carries the main collection as well as the menswear line Japan Rags and a full range of accessories.