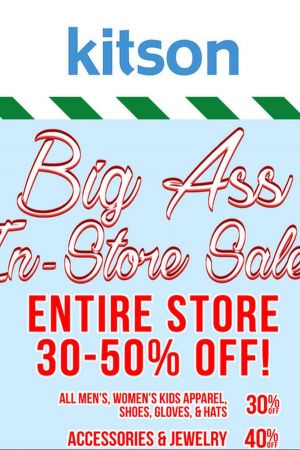 Kitson Is So Over

by Rebecca Cringean — December 14, 2015
Los Angeles’ Robertson Blvd is a quaint little shopping street, full of sweet boutiques and high end fashion. Its current calmness, however, belies the district’s tabloid past. When visiting, if you tip the valet, squint your eyes and imagine just hard enough, you’ll likely be able to feel the street’s ghosts; transporting you to the early 2000s, before the economy tanked. Back then, Robertson Blvd. was not so tranquil. It was, in fact, awash in paparazzi, swarming around the likes of Lisa Kline and Anya Hindmarch. A time when boutiques installed custom curtains to shut out the prying tourists and camera lenses. A time when Lindsay Lohan and Paris Hilton parked supercars haphazardly, lap dogs in totes, to run into shops, tempting the paparazzi into taking the mutually beneficial cover shots for Hello Magazine, People and In Touch.

And the queen of the scene? Kitson. Kitson specialized in all things starlet, from timely “Team Aniston/Team Jolie” tee shirts to new designer finds to cheekily profane writing tablets and board games. Kitson was founded in 2000 by Fraser Ross, who used his middle name to christen a store with his innate understanding of the intersection of style and celebrity. In its Robertson heyday, guards ran lines at Kitson, akin to a nightclub, allowing a few in a time, always stopping to part the seas for the debutantes and pseudo celebrities. The fame and paparazzi the young women carried with them, generally photographed entering and leaving the store, helped lift Kitson to household name status. And Kitson cashed in, carrying more tees boasting its own name, seeming to sell out with too many tacky trinkets for eager folks who were buying into the store as a kitsch brand in and of itself. All in all, Kitson over expanded to 17 shops, including a massive, but appropriately placed outpost in Vegas and one in the Los Angeles International Airport, of all places.

Just as the likes of Nicole Richie faded from the headlines, stores like Lisa Kline shuttered their doors and mags moved on from touting the same old “celebrity” photos. Kitson hung in strong for a while there, a reminder of a now bygone, overindulgent era. But to everything, especially in fashion, there is a season. And last Thursday, Kitson had to admit defeat.

Kitson announced it is closing all 17 of its brick and mortar stores as well as its online sales. Clearly the store fell prey to hype, rampant self-aggrandizement and, frankly, client boredom. Just as Paris Hilton no longer captivates headlines, Kitson, unless purchased and resurrected, might soon join Hilton atop the “Where Are They Now?” pages. Calls to the Kitson head office for comment are met with an answering machine almost confoundedly announcing that it is full and cannot record new messages. Emails to both the PR and buying department are returned, stating that so and so or such and so no longer work for the company. The emails recommend a different contact, which returns the same message. That email’s recommended contact, again, retuns the same message and so on in a large circle. It’s almost as if the entire operation shut down over night.

And so we bid adieu to Kitson and its Kardashian-crowded doors, snooty hipster staff, leopard print Docs, graphic tees, drinking games and novelty jewelry. Take your coveted Kitson blue bag and head off to The Ivy for crab cakes. Just like the mid 2000s, Kitson is so over.