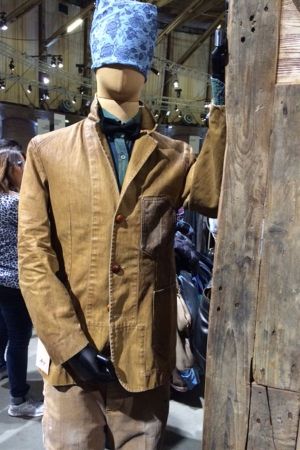 by Maria Cristina Pavarini — October 31, 2014
The second edition of Kingpins kicked off on 28 October in Amsterdam presenting denim anteprimas for s/s 2016. Despite a quieter start when compared with the first edition held in May 2014, on the first day, exhibitors seemed happy with the quality and quantity of visitors. During Tuesday afternoon and on its second day, the event became busier and crowded.

The show hosted about 40 exhibitors; a similar amount when compared with those hosted for the first time, although, as pointed out by some visitors and insiders, the ratio of companies participating had changed from the previous edition and offered a higher amount of extra-European manufacturers and full package producers.

Probably some less euphoria was in the air because the first edition of the show had debuted within The Denim Days (happening only in Spring time in Amsterdam and involving students and consumers) – and also because some of the exhibiting companies were involved in organizing their participation into the Global Denim Awards catwalk show. Plus, some companies decided not to participate because of a mushrooming of specialized shows in Europe and also because of a debuting Istanbul edition of Premiere Vision taking place from 29 October, coinciding with the second day of Kingpins.


Also the catwalk show presenting the finalists of the Global Denim Award was very much appreciated. The location hosting the show was very cool and outfits presented by each designer and denim manufacturer were all different from each othere  and impressively interesting.

Though top player exhibitors and innovation were crowding the show. Invista launched its new Beauty concept enhancing body figure while keeping wear comfy. Orta Anadolu presented Ultra Flex, a selection of body enhancing lightweight denims perfect to be worn in the gym, during yoga sessions as well as before and after training. Their Comfort2 denim package is a cool multi direction denim stretch. The Body Science selection of fabrics looks exactly like denim, though they are as soft and performing as jersey and knitwear.

Hi-tech performance and eco-friendliness meet at Denim Valley by Tejidos Royo. The denim division of the Spanish textile specialist launched Narindi, a new denim dyed with a special indigo dye substance naturally obtained from oranges grown in plantations of the Valencia area. They also launched WDT (Wearable Denim Technology), a capsule of denim fabrics with extra endurance and performance. Calik launched Skin Flex and Thin-Up, a series of denim aimed at making the wearer look in better shape  and a series of super-lightweight denims, plus their M-Core stretch denims aimed at men, characterized by a masculine comfy image.