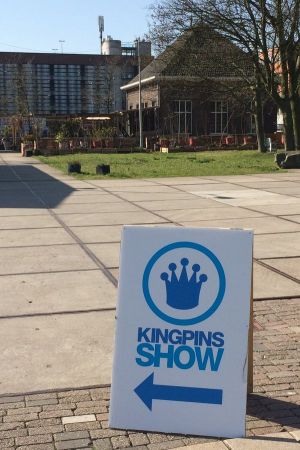 by Maria Cristina Pavarini — April 17, 2015
The April 2015 edition of the Kingpins trade show, has registered a total of 1,052 attendees from 594 companies, thereby exceeding expectations of its organizers who forecasted the attendance of about 400 companies (also read our previous report here). Buyers from 120 companies came to Kingpins for both days of the show.

Among its visitors were insiders from key brands of the market including 7 For All Mankind, Benetton, Denham, Diesel, DKNY, Esprit, G-Star, Lee, Marc Jacobs, Replay, Ralph Lauren and more.
The show, accepting invited guests only, was pervaded by an optimistic atmosphere despite the general market difficulties and a general decline of denim consumption.

Kingpins’ first day was more crowded and busy, while on the second day it saw less attendance, probably also because many insiders were involved in preparing for the closing event that took place in the evening - the inauguration of the Denim City, Amsterdam's newest denim innovation campus and the opening of Amsterdam Denim Days to the public.
Denim City, home of House of Denim, inside a former tram depot, will host workshops and laboratories involving the denim industry and young generations in a city which is increasingly becoming the denim capital of Europe (for more information also see our reportage).

Much innovation and new developments were presented within the show, disclosing denim novelties for f/w 2016/2017. Major trends characterizing the new season in terms of silhouettes will be – again - skinny fits for men, on the one side, as well as a slight return to denims that don’t employ stretch, or employ it without looking like stretch fabrics. For women, flares are back as well as a more feminine version of the boyfriend cut that is tighter at the end and around hips, though always boxy and unisex.

Sophisticated weaves and woolly hands
Wintry looks and blends characterize many denim collections. Berto presented various melange effect denims, some employing a percentage of cashmere (up to 20%), with selvedge. Denim Valley, by Tejidos Royo, presented various 100% cotton denims with a woolen optic. Candiani Denim presented various soft touch melange denims that also employ nylon and Tencel, though look like formal fabrics. Orta presented its selection of Cozy Denims, employing up to 20% wool as well as a series of denims with a moleskin effect. Calik opted for woolly aspect and uneven prints resembling wool surfaces. A series of micro-designs and micro-weaves were presented by ITV, Berto and Cone Denim. Cone celebrated its White Oak division’s 110th anniversary, also revamping some of their archive most peculiar fabrics, including special ribbed-woven ones from the 1980s.

The beauty of handmade fabrics
A newborn handwoven 100% organic denim collection Seven Senses debuted at Kingpins. This new collection was born from a partnership between Indian NGO, KDB Samiti, and Dutch entrepreneur Andriana Landegent. Thanks to this collaboration these 100% cotton selvedge denims are woven by Northern Indian families from their homes in Bihar and can be ordered with low minimum quantities and according to each designer’s or single brand’s request. Aim of the initiative is not to exploit local population but help them increase their standard of living.
Berto has also launched its Le Mani, a wide offer of hand-woven denims.

Greater innovation on show
More and more companies are focusing on highly innovative fabrics. Armalith, in collaboration with Royotec, a division of Tejidos Royo, presented highly functional tear- and rip-resistant, breathable stretch cotton touch denims to be worn by motoriders. Invista launched a wide series of new blends, including fabrics employing hollow fiber Thermolite and Coolmax and Tencel blends. Orta, as part of its upmarket selection of fabrics, launched Aspen, a group of denims with highly protective properties such as thermo-regulating, stretch, waterproof. Cone Denim launched a new denim employing Dyneema, a highly resistant fiber with higher moisture management properties, and other denims employing the Westex fiber, a fiber with flame-retardant properties. More and more coatings were also presented on show. For instance, Bossa offered a selection of leather-like denims and others offering contrasting colors on their inner face.

Sustainability is cool
ITV presented a series of fabrics made with eco friendly and recycled fabrics and others dyed with vegetal dyes. Denim Valley offered a series of denims made with recycled denim fibers. Orta has focused its attention on sustainability for this edition. At the eve of Kingpins they launched their Vegan denim line of fabrics, employing a new dyeing method with natural dyestuff that has better affinity to cotton and guarantees greater color stability and consistency. They employed tan, obtained from the dry part of an acorn shell and vegetal indigo dyes. The first denims they are offering are shades of blue and light browns, though more hues will be offered in the upcoming seasons.
Okinawa developed a new dyeing technique for leather that employs waod, a blue vegetable substance similar to indigo, that can be later aged and treated with laser and stone wash just like denim, though it is ecological.