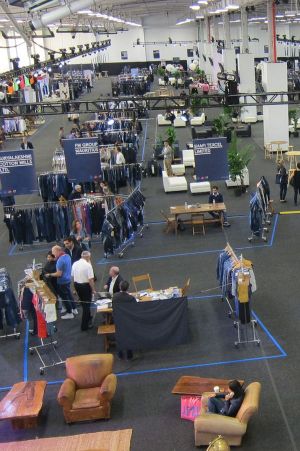 Performance fabrics and retro-looking ones á la the 1970s and ’80s dominated the latest edition of the denim showcase Kingpins New York, which concluded its two-day run at a new location, Basketball City at Pier 36 in lower Manhattan on the East River, yesterday. There, just over 60 exhibitors, which were mostly fabric mills from all over the world, showed their offerings for the spring 2017 season.

It was also the first time this seasonal edition of Kingpins was held two months earlier, in November instead of January, to better meet the market’s needs and schedules.
“It’s a new space, new time, new beginning and new opportunity for failure,” show founder Andrew Olah told Sportswear International. “But we are happy with the result. Our attendance is down but the quality of our attendance is the same or better. We are a jeans show so we have to look at the quality of the statistics of who and who didn’t come. But I think the majority of the people who didn’t come aren’t real jean companies because we had the really key buyers.”

He added: “We had to cut back the size of the show because some people didn’t have budgets to do another show and it’s kind of dramatic for us to try to provide that. When you move and you change everything–the location and the time, which is almost everything–you have to take a pill and you have to rebuild. We knew that and we have to go back before we go forward.”
While most exhibitors admitted that traffic was lighter than in previous editions, they nonetheless seemed generally satisfied about showing their numerous and eye-catching products in the new, very airy and open venue.

US-based Cone Denim hawked its new Natural Indigo fabrics, which are made from indigo plants farmed in Tennessee but do not incorporate locally grown or organic cotton. Blue Farm from China/Taiwan pushed outerwear-appropriate denims that included coated nylon blends perfect for bomber jackets as well as indigo in non-traditional forms such as shirting fabrics that were rich in texture or downright sheer.
Mexico-based Global Denim, meanwhile, echoed an oft-heard sentiment at Kingpins: that stretch denim is no longer a women’s-only fabric and that menswear designers and customers are rapidly embracing it (and that its men’s uses may soon even surpass women’s).

As Global Denim spokesperson Michelle Branch explained, the company believes that the longstanding rivalry between rigid and stretch is simply no longer valid given today’s market needs and “it’s not even a discussion anymore.” Her favorite company selections spanned the extreme opposite ends of the spectrum: “Hollywood,” a soft-touch cotton/poly/Tencel blend in an easily drape-able 6.5 oz and “Oakland,” a 15 oz denim that can be washed to achieve vintage or marbleized looks.

Blends and stretch fabrics were also on offer by Spanish mill Royo, which has produced a bistretch denim and a linen-cotton women’s blend. In the next booth over, Italian mill Candiani celebrated the 25th anniversary of its “72 Warp” material, which now combines the mill’s heritage with the future thanks to comfort stretch created by adding Lycra. Despite its comfort, this particular fabric still features an authentic denim look.

At the other end of the hall, Cotton Inc, the organization devoted to the promotion of cotton fibers, showcased fabrics with interesting tonal textures produced by lasers. Its onsite trend expert also predicted an upswing of ’70s blue-tone denim, chalky and matte coatings and either pristine or imperfect foil-coated fabrics for spring 2017.

Kingpins also featured four seminars over its two days, which discussed new opportunities in knit denim, s/s 2016 catwalk trends, a look at s/s 2017 surface designs and a discussion about what the phrase “premium denim” actually means today. The panel of the latter talk came to the conclusion that sustainability does and should play a role in “premium” fabrics but that, unlike the food industry, the fashion world is still years behind from embracing sustainable options and technologies.