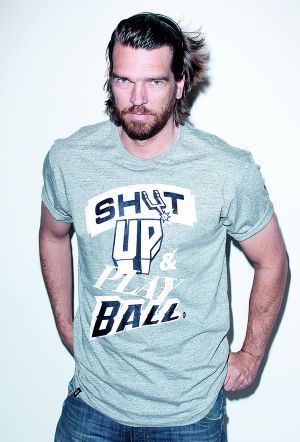 — November 05, 2013
Christian Grosse opened his first Kickz store on November 1, 1993 in Munich’s Feilitzschstraße 1. Selling sneakers and a range of basketball clothing, the shop soon became a major success. Ten stores, two outlets and an even better-selling online shop later, Grosse today still does what he did back then–only on a different scale. Plus he didn’t only make himself at home on the retail side, but also started the K1X brand in the late nineties. The brand is by now an internationally sold corporation, registered a turnover of €6 million in 2011 and still has its headquarters in Munich’s main station district, right next to the Kickz.com office. This is where we met founder Christian Grosse to talk about his 20 years in business. Interview by Maria Hunstig

Kickz' anniversary logo
Congratulations, Kickz is turning 20 these days! Which memory do you have of the day 20 years before now?
Haha, that’s funny. I just figured out that exactly 20 years before now, so one day before we opened the shop, I had a heroic modeling job as a giant-like, Sirtaki dancing Santa Clause for a Software Company’s advert campaign.

What was the new thing about the first Kickz store back then?
In 1993, there were practically no sneaker boutiques yet. The concept of a 60 to 70 sqm store which shows its sneakers tidily on single shelves without categorizing them by certain classes or brands, but simply presented as a good selection, that was new. Even in the US, they would rather have those see-through Plexiglas slot walls, but we had those quality frosted glass shelves very early.

And how did you turn from stationary to mail order?
Our store in Feilitzschstraße ran very well. We always had a bouncer there on Saturdays as the store was so packed. You could have easily turned that into maybe 50 stores back then, but we just simply enjoyed being successful und earning good money. I was mainly working as an importer for Rides Snowboards during those days but then I sold that business to Titus and bought-out my then business partner as he decided to finish law school instead. That was when I started to take things serious and then we started the mail order thing. We took out adverts in BASKET [German basketball magazine] and started to print flyers that came out every month in the form of foldable posters.

And then the internet came by…why did you go online so early?
When Kickz had its first website, the internet was so small, that we didn’t even want to pay those 30-40 DM a year for the Kickz.de URL. But we believed the internet would work well for our special segment. We were always bad in filling a 100-page illustrated catalog with products that would then be available in three to four months. We always wanted to show things that would be delivered in four to six week or even immediately in the best case – therefore, the internet was perfect for its quickness.

So how did K1X, the clothing brand, develop from there?
We started making our own t-shirts relatively early. Those were spoof t-shirts where we played around with the then very trendy Calvin Klein logo, just the way all the streetwear brands still fool about with brand names today. But we couldn’t use Kickz as the brand name of our clothing due to trademark laws and also we thought that it might be more clever to have separate names for the store and the clothing as other stores might not be willing to sell a brand that has the same name as a competitive retailer. So we came about with the K1X spelling which was concise and protectable. The first external store which stocked K1X was Footlocker, back in 1998. They were amazing partners although, at that time, we were probably the smallest brand they ever sold.

How successful is K1X internationally?
Our strongest markets are Germany, Austria, Switzerland, Luxembourg and the Netherlands. But we do have more international success as well, especially with our different collaborations, such as our releases with Colette, Patta, Sneakersnstuff, Solebox etc. The craziest one is definitely our sneaker cooperation with Patrick Mohr, which will soon be released in new colors for the fourth time. We have retailers in Los Angeles and Las Vegas who go really crazy for that shoe and buy whichever amounts they can get. The cooperation opens the doors of a lot of more high-end retailers who wouldn’t have known of K1X otherwise. But still, we are not making a 100 million turnover and we are not a global monster brand.

Do you want to be a global monster brand?
Well, in our segment, everyone would like to be Nike, right? But our focus is mainly on finding a twist between basketball and lifestyle and we feel very at home in that field.

One of the new K1X x Patrick Mohr sneaker colorways

What’s next on the agenda?
We are going to open up a new store in Berlin’s Torstraße before Christmas – the exact date still depends on the floor layer [laughs]. But we don’t really have a full concept or a name for the store yet – we are always working very spontaneous and do not have some sort of fixed expansion plan. If someone has an idea and we like the project, we do it.
Another new project is Kream, a very taboo-free label for caps and t-shirts, designed by our graphic artist. Those bold designs are very far from Basketball and wouldn’t have fitted to K1X, so we created this new brand.

Now there are quite a few brands here in Munich which are big in caps and sneakers and streetwear and parties….How do you evaluate the presence of brands like Beastin?
Beastin was started by a former employee of ours. Our ways have separated for different reasons, but we are all buddies and play basketball together. I think it’s good if there are several brands putting ideas in the market, because that pushes the market further. Beastin has really managed to put Munich in the people’s mind as a place where several cool brands come from and where people know how to make a brand. That’s useful for all of us! Back in the 90s, there were around 15 hip-hop brands from New York which all had similar products and did similar things, but they treated the market from different sides and were all very successful in the end. I mean the turnover of Beastin and Distorted People and us are still such a small margin of what is generated in this segment. It will never be like: if we sell this cap right now, one of the other Munich brands will sell one less. Quite the contrary!

How long will the hype around sneakers, caps and basketball stick around?
The direction is always changing on the long run. If I think back 20 years, there has always been a pendulum between hip-hop/basketball and skateboard/surf. Same for brands: it commutes between Adidas Superstar and Quicksilver, Ripcurl and Billabong. At the moment, there is an extreme movement to the authentic sportswear brand again, even the core surfers are wearing basketball tops and snap back caps right now. I think this segment is only just starting and that we will sell even more caps in five years from now. Girls sneakers are just starting off and so are court basketball shoes. Those court shoes were THE giga trend from 1980 to 19995 and right now we are so to speak in year one of the basketball sneaker trend’s revival!