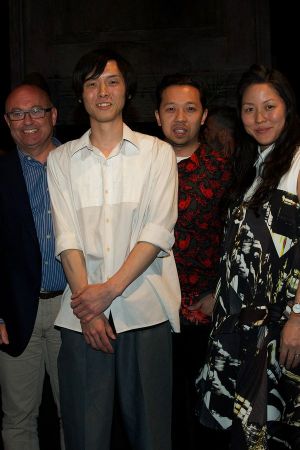 by Lorenzo Molina — May 06, 2014
Japanese designer Kenta Matsushige has been awarded with the Première Vision Grand Jury Prize for 2014, which includes a €15.000 prize. The decision was made by the fashion competition jury, led by Kenzo creative directors Carol Lim and Humberto Leon, after the closing of the Hyères 29th International Festival of Fashion and Photography. Matsushige was one of the ten finalists of the Première Vision Grand Jury prize, who had all been invited last February's editions of Première Vision, Modamont and Expofil. Here, they were put in direct contact with exhibitors who expressed a desire to collaborate, and thus benefitted from a privileged access to yarns, fabrics and trims. Additionally, in a new development this year, they were welcomed by select exhibitors at Zoom, the fashion manufacturing show, to help them manufacture their collections.

Based in Paris, Kenta Matsushige’s collection is inspired by architecture: each layer interlinks with the next through details such as slits, offsets and ellipses. This is how he describes it: «A work installed within a bucolic setting or in a small provincial town, will have more presence than lost in a city. My collection aims to be urban and modern whilst respecting hinabi, pastoral beauty, which is in opposition to miyabi, urban beauty».

In addition to the economic award, Matsushige will also be invited to the Première Vision shows in New York (22-23 July) and Paris (16-18 September), where the designer will be exposed to the international fashion industry and professionals like buyers, designers, brands and press.
The next date for the denim industry is the Denim by Première Vision show in Barcelona (21-22 May).