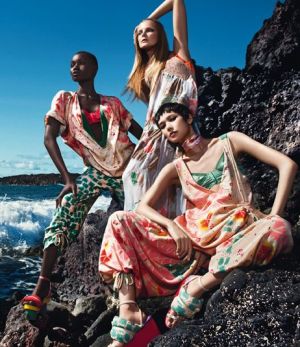 by Barbara Markert — July 12, 2011
Today, the corporate group LVMH announced the replacement of Antonio Marras as Creative Director of Kenzo by Humberto Leon and Carol Lim, founders of the US enterprise Opening Ceremony, with immediate effect. Antonio Marras had worked eight years at Kenzo, and was responsible for all collections. In the last months, rumors had spread about his departure. Especially after the nomination of a new CEO, Eric Marechalle, in January of 2011. Details of the dismissal of the Italian designer were not published.

Humberto Leon and Carol Lim, both 36, are newcomers in the luxury fashion segment. The duo behind Opening Ceremony, the fashion and retail concept they founded in New York City in 2002, for their new job, will split their time between New York and Paris.

"Humberto and Carol will bring their fresh creative talent and innovative approach to Kenzo to rejuvenate this iconic brand. I am confident that they will leverage the unique contemporary and lifestyle spirit of the brand to position it ideally for an ambitious development," declared Pierre-Yves Roussel, Chairman and CEO of the Fashion Division of LVMH.