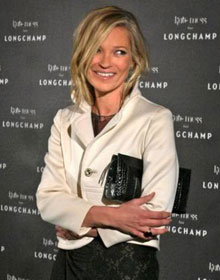 Moss, accompanied by the Cassegrain family, which owns the famous French house, welcomed over 700 guests to the zebra-themed venue, which hosted a live performance by the London duo Queens of Noize and unveiled the supe's snappy designs in a series of moving images on its walls.

The highly anticipated line arrives at Longchamp boutiques and Bloomingdale's on 59th Street in New York City on Feb. 11.