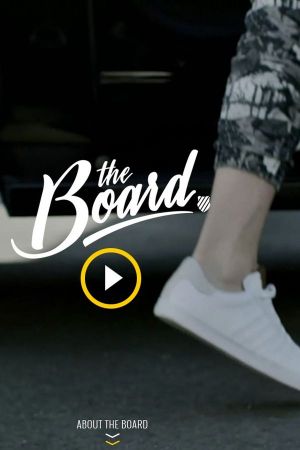 Visual of The Board campaign
Stories

by Lorenzo Molina — March 25, 2015
American tennis brand K-Swiss has started a worldwide campaign called ‘The Board’, which aims to involve 100 creative and insightful individuals into different areas like brand positioning or sneaker design in order to “bring the K-Swiss brand back to prominence”. Led by renowned DJ, producer and entrepreneur Diplo, the application site to become a “board” member of K-Swiss is already opened and submissions can be made until April 30, 2015.

The one hundred selected applicants will gain access to six members-only online sessions with industry insiders, who will give real tasks to the board members in fields like social media promotion, business plan and the two mentioned above. The Board will make decisions on real projects that the brand will follow.

Barney Waters, chief marketing officer of K-Swiss Global Brands: “Young people want their own brands, their own voice and their own businesses. K-Swiss is committed to outfitting and inspiring this generation of entrepreneurs […]. We have created a program with substance, where our customers get involved in the process of rebuilding K-Swiss and make real contributions.”

Campaign ambassador Diplo has earned multiple Grammy nominations and has worked as a producer for pop artists like Usher, Justin Bieber, Lil Wayne, No Doubt, Beyonce, Madonna and Pharrell Williams.