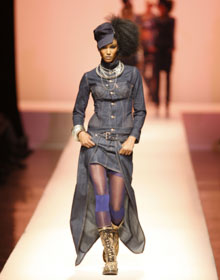 — October 23, 2009
French fashion designer Jean Paul Gaultier has collaborated with Levi’s on a summer 2010 collection. Shown in his menswear collection in June 2009, the pieces are reinterpretations of two of Levi’s classics, the 501 jean and the denim jacket, reconstructed with bondage effect and Gaultier’s famous marine stripes. Altogether, there are four looks for men that will enter stores in January 2010.

For women, Gaultier debuted three denim looks with Levi’s, shown during fashion week in October. The enfant terrible of France’s fashion world combined his own iconic idea of wearing lingerie as outerwear with famous Levi’s pieces. The mix of vintage lingerie constructions and denim outfits comprise a dungaree with a conical bra top, a mini-midi skirt with a jacket and sculptural bra structure, and a jeans-top-combination reminiscent of old corsetry. The womenswear pieces will be available in stores in May 2010.

Both lines will be produced in Levi’s factories in Turkey and Poland – the European centers of high-quality denim manufacturing for Levi’s. Prices range from €220-€400 for the 501 jeans and €270-€400 for the menswear jackets.