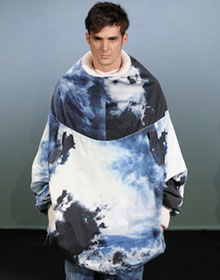 by Maria Cristina Pavarini — July 27, 2010
Trieste, Italy played host to the ninth ITS fashion contest on July 16-17, drawing more than 400 guests. In the beautiful "Salone degli Incanti," transformed into a retro-futuristic steampunk spaceship to match this year's flamboyant concept, ITS#NINE celebrated global creativity, with a network of 880 schools, more than 7,300 portfolios from over 80 countries, and 340 finalists. John Galliano, Christian Dior, Antonio Marras, Roberto Cavalli, Vivienne Westwood and Alexander McQueen were among the companies offering support and job opportunities. The platform was created and developed by EVE in collaboration with Diesel and YKK.

The two-day ITS#NINE events started on Friday, July 16 with a vernissage of ITS#ACCESSORIES, showcasing the works of 10 finalists. Huge metallic cogs, time capsules, steam-powered devices, tubes and cables everywhere were part of the set-up created by Belinda De Vito. Projections hinting at engine rooms and sounds devised for an immersive experience, combined with wonderful videos by Fabio Bressan shown on a 26m x 6m wall, rounded out the setting.

On Saturday, July 17 guests and the local institutes of Trieste were treated to a fashion show where the incredible projects of the 12 ITS#FASHION finalists were revealed. It was a surreal and irresistible trip offering the highest expressions of creativity, ending with the Diesel project show of 12 outfits specifically produced in denim by the finalists.

Winners of the ITS#FASHION contest include Japan’s Takashi Nishiyama of Coconogacco for the fashion collection of the year and South Korea’s Yong Kyun Shin of Central St.Martins College of Art and Design for the Fashion Special Prize. Germany’s Michael Kampe of Hogeschool  in Antwerp won the Diesel Award, while Belgium’s Niels Peeraer, also of Hogeschool, won the RA prize. Britain’s Sarah Williams from the London College of Fashion won the Accessories Collection of the Year Award, while the YKK Award went to Britain’s Emma Yeo. The Absolut Award was given also to Williams, as Taiwan’s Yuwen Lu from the London College of Fashion took home the ModAmont Award.