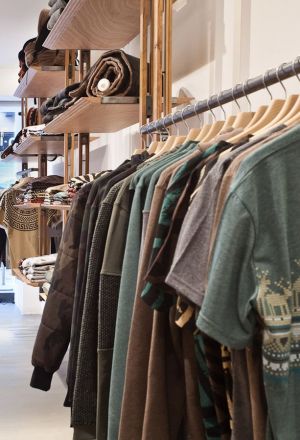 The store hosts the Iuter brand and focuses on tops and sweatshirts characterised by a strong attention for design and printed graphics. The men’s and women’s collections are completely made in Italy by the company, which is owned by the two entrepreneurs and based near Varese.

Iuter was founded in 2002. It is distributed in Italy to about 180 stores and only recently also distributed internationally. At present it is sold to 225 doors, mostly in Russia, UK and Germany. By end 2014 they expect to sell the brand to about 300 stores worldwide, while also starting to distribute it in the US.

The new flagship also offers a special series of products such as an eyewear line, a limited edition of the iconic M120 Boots made in collaboration with footwear manufacturer Fracap, a line of bags and a selection of items from the parent brands; Uppercut - an exclusive brand that is designed and produced by the duo’s own company, and Octopus, also produced by the same company. The store also offers special edition Sennheiser cuffs made in collaboration with Iuter.

The store was designed by Mammafotogramma Studio and has a clean and modern look. The store features wood and metal, and utilitarian fittings. It is also characterised by a special 3D modular wooden geometric structure - Wood‐Skin™ - that covers the cash desk area and part of the walls of the store. Mammafotogramma Studio also developed the 3D modules. The store can also host shops-in-the-shop and temporary stores in one section of the store.