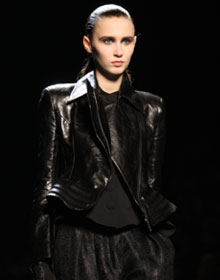 IN PARIS, GOTHIC TO POWER WOMAN OF THE ’80S

— March 17, 2009
In contrast to this season’s fashion week in Milan, Paris fashion week, which ended last Thursday, didn’t have a shorter schedule. Still, quite a lot of fashion houses, such as Rue de Mail, Anne Valerie Hash and Vanessa Bruno, preferred to show their collections in private spaces or smaller (read cheaper) locations due to the economic crisis. Some even had presentations without models, such as Requiem, Undercover and Martin Grant. The Spanish leather specialist Loewe chose a smart combination of presentation, lunch and show, where models presented three consecutive catwalk presentations to smaller audiences that were also offered small snacks and coffee. Meanwhile, the big players, such as Chanel and Louis Vuitton, held fast to big shows in huge locations such as the Grand Palais or an exclusive tent in the courtyard of the Louvre.

Based on the nationality of its designers and guests, Paris is known to be the most international of all fashion weeks. This season, however, a lot of Russian, Chinese and Arabian costumers were notably absent, while members of the press dropped in for several days and not for the whole nine-day schedule.

Overall, though, the fashion shown in Paris in nearly 100 shows offered strong trends for fall/winter 2009-10. The gothic theme, shown in previous seasons by Givenchy and Gareth Pugh, only seemed to have gained popularity this season, influencing creations by Bruno Pieters, Barbara Bui, Ann Demeulemeester and even Martin Margiela. Olivier Theyskens for Nina Ricci and Haider Ackermann translated gothic references in impressive collections, which were surely some of the highlights of the Paris fashion week.

Some more moderate and wearable ideas of the gothic were reflected in purist-influenced collections, largely consisting of leather used on a wide range of garments, including strong, well-cut trousers, jackets and skirts in tonal colors such as black, gray and white, as in collections by Kris Van Assche, Yves Saint Laurent, Yohji Yamamoto, Wunderkind and Givenchy. These collections could be criticized for being influenced by the economic climate but will nonetheless find their customers.

The return of the ’80s with its elegant and powerful women postulated by Yves Saint Laurent and Thierry Mugler was certainly another strong trend during Paris fashion week. Balmain interpreted Mugler’s famous pagoda-jacket in a new, modern way, while designer Rosemary Rodriguez attempted to reinvigorate the Mugler label with typical Mugler silhouettes, which also influenced the collection of Alexander McQueen. Balenciaga reinterpreted old patterns and designs from its archives from the ’60s and ’70s in a strong couture manner. Giambattista Valli showed a modern homage to vintage YSL creations, while Lanvin created elegant and feminine silhouettes but with a twist of ideas from the ’50s and ’80s. Chanel, Dior, Gaultier, Hermes, Kenzo and Viktor & Rolf redefined their own signatures, whereas John Galliano broke from the pack by presenting traditional Russian-inspired costumes in a wonderful high-tech laser light show. Most notable was the return of Chloé under the direction of Hannah McGibbon, who created a soft and feminine collection in warm earth tones with voluminous trousers as a counterpart to ubiquitous leather leggings, sarouels and very slim pants.