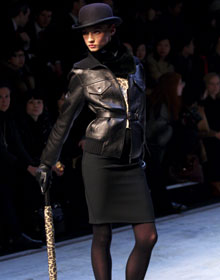 IN PARIS, BACK TO BLACK AND LEATHER

— March 18, 2010
There were three events during Paris fashion week, which ended last Wednesday, everybody was talking about: the giantic iceberg imported from Sweden, which was the centerpiece of the Chanel show; the posthumous show by Alexander McQueen, which was presented at a private salon; and the blacklisting of Carine Roitfeld at Balenciaga. The famous fashion house refused to invite the editor in chief of French Vogue and her team to the show, fueling endless speculation. The fashion consultant Donald Potard later explained on his blog “Uncross your legs“ that apparently the creative input of Balenciaga was given to another fashion house by an editor of Vogue, who worked as a consultant for both companies.

Gossip aside, Paris fashion week showcased two major trends for next fall: black and leather. The color black was not only seen in collections famous for their black clothing such as Yamamoto, Yves Saint Laurent, Gareth Pugh, Limi Feu and Peachoo + Krejberg, but also at Viktor & Rolf, Lanvin, Hermès, Miu Miu, Elie Saab and Chapurin. Given the monochromatic theme, designers laid their focus on cuts and details and, as one option, chose to reinvent the classics. Traditionally pleated-front trousers, coats and skirts were updated, such as at Margiela and Hussein Chalayan, or embellished with complex detailing, such as at Miu Miu and Karl Lagerfeld. In addition to black, soft colors including brown, beige and earth tones dominated the catwalks as seen at Chloe, Akris, Damir Doma, AF Vandevorst, Rykiel and Rick Owens.

The second major trend, leather, was used in nearly every collection presented over the nine-day fashion week, sometimes as a small accent, but mostly as material for the whole garment. Hermès, Haider Ackermann and Dior by John Galliano worked lavishly with ultra soft leather. Galliano, for example, created huge redingote-coats out of the material, while Hermès recreated a modern Emma Peel look from the British TV series “The Avengers.” Haider Ackermann surprised with his use of lace constructed from leather.

One big trend from last winter, the pagoda shoulder, previously invented by Mugler and resurrected namely by Balmain, is over. The shoulder for next winter season is smaller and more feminine, with attention drawn now to the collar. Very often jackets and coats sported hoods. Fur also was used more in a decorative function versus a complete statement as a separate. Meanwhile, animal prints appeared to be in still and used as a eye-catching detail against black pieces.

In contrast to the slim, minimalist and fluid silhouette that dominated most of the shows, Louis Vuitton by Marc Jacobs surprised with a whole collection inspired by Dior’s New Look from the Fifties. Ample swinging skirts and dresses made from warm winter fabrics such as wool tweeds and bouclés set a new, but old-fashioned course. Similar to Jacobs, Hannah McGibbon presented a collection also with wide and ample looks in the style of the 1970s.

The fairs held during fashion week, including Tranoi and Premiere Classe, meanwhile, had satisfying news to report of their own. Premiere Classe noted a 24% increase in its attendance, while Tranoi, already spanning three locations, launched a new Tranoi Showroom event, with longer business hours, situated at Rue Parc Royal in the heart of the Marais and in close proximity to all the shows and events during this fashion week in Paris.