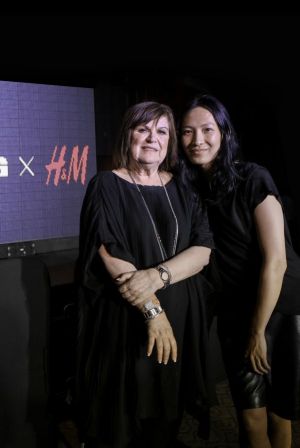 H&M teams up with Alexander Wang

by Lorenzo Molina — April 14, 2014
Alexander Wang has joined forces with H&M and will create a capsule collection for the Swedish retail giant to be launched on November 6, 2014. This was announced on Saturday, during an event at the Coachella Music Festival, in Palm Springs, CA, USA. It is the first time that an American designer joins forces with H&M on their designer collaboration. The Alexander Wang x H&M line will feature apparel and accessories for men and women and will be available in 250 selected H&M stores worldwide and online.

"Alexander Wang is one of the most important voices in fashion today. He understands exactly what people want to wear and does it with an energy and passion that’s infectious. It feels incredible to be collaborating with him this year,” says Margareta van den Bosch, H&M’s creative advisor.

Launched on the runway in 2007, Alexander Wang’s eponymous brand offers urban clothes characterized by material contrasts and neat-cut lines with black as one of the dominating colors. “This will be a great way for a wider audience to experience elements of the Alexander Wang brand and lifestyle”, stated the designer in regards to the upcoming cooperation.

H&M designer collaborations started with Karl Lagerfeld in 2004 and since then the fashion chain has partnered with brands and designers such as Maison Martin Margiela, Stella McCartney and among others Roberto Cavalli.