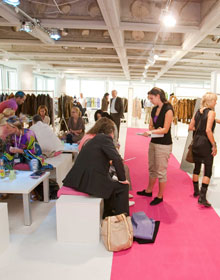 by Lisa Dartmann — July 29, 2010
Fewer visitors attended CPD, the international trade fair for womenswear and accessories, in Düsseldorf. All in all 17,000 trade visitors versus last year’s 18,700 visitors came to view the 950 collections on display for S/S 2011. Visitors came from 42 countries. Avid ordering activity was reported, with business picking up again and stocks are depleted.

Although attendance was lower than a year ago, many exhibitors praised the improved quality and international spread of the offerings. In this spirit, Philipp Kronen, managing partner of the Igedo Company, announced a different fair format for February 2011. “For several months now we have been working with our team on an altered exhibition format for 2011. We had always said that the re-orientation of CPD was not yet complete,” he said. Accordingly, with the forthcoming event in February, the fair organization will re-define its concept.

Meanwhile, the fashion business around the fair in the showrooms and halls was still very busy. Berlin may have been the kick-off fair venue but in Düsseldorf business was good, according to many trade visitors. People were in a good mood, the economic situation was positive and all the showrooms were busy.

Supremé by Munichfashion Company also had its first debut in Düsseldorf. The new order platform showed more than 80 exclusive brands in a pleasing atmosphere at Kaiserswerther Strasse. The small fair was organized as an exclusive shop were people could walk from stand to stand. Next season Supremé will show more brands on two floors, with many early registrations to show for it. Said Aline Schade, senior sales manager of Munichfashion Company: “All visitors and exhibitors were happy with the organization.”