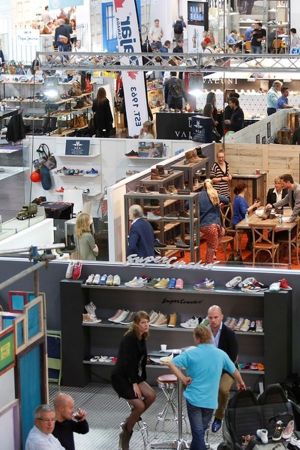 by Lisa Dartmann — March 03, 2014
GDS shoes fair takes place from 12 to 14 March on the fairground in Düsseldorf. About 800 exhibitors from more than 30 countries will present footwear and accessories fashion for the 2014-15 Autumn/Winter season. The sourcing fair Global shoes with about 270 exhibitors begin one day before from 11 to 14 March. The previous fair offers some newcomers. Bruno Bordese presents his new shoe line Lara Hampton. T&F Slack Shoemaker London shows colourful brogues, and the Delle Cose label presents its new bag collection. The designer Rosa Mosa from Vienna will show innovative shoes for women and men, largely handmade of natural materials. The Upper Style Show will be opened by model Svenja Holtman. Guido Maria Kretschmer will be guest at Högl stand to present his new shoe collection “Guido Maria Kretschmer for Högl”. The young segment Design Attack will celebrate its 20th anniversary at the upcoming GDS. The theme is “Alpen Rocker Stadl” and is a mix of independent fashion, urban and underground street wear.

GDS takes place in the familiar format for the last time, before it moves forward as a kick-off event in July 2014. The new fair concept takes place from 30 July to 1 August. Silmultaneous with the premiere a new reworked trade fair concept will be launched: tag it! by GDS – the show for private labels in shoes and accessories.