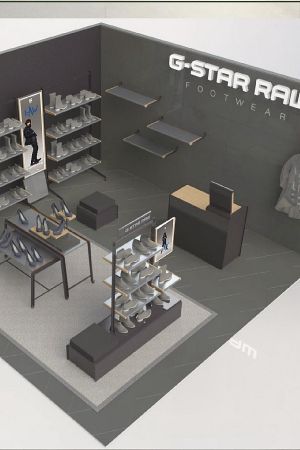 by Julia Mönnich — September 24, 2013
Dutch denim label G-Star Raw has created a new footwear shop-in-shop concept. The London Overland Shoes Limited, license holder for G-Star Raw Shoes worldwide, has created a versatile interior concept consisting of furniture, lighting, flooring and décor, which can be installed quickly into 6.5 – 25m spaces within department stores, to create the G-Star Raw mood. The two G-Star Raw shop-in-shops (men’s in the basement, women’s on the first floor) in Cologne are examples of how this flexible concept can be realized. It is not yet clear how many concept stores will be opened, but the focus is on high quality department stores and multi-brand spaces located in the Netherlands, Spain and Germany. “As shoe licensor we enter the market in which G-Star is already established.” Says Stephan Krug, Overland.

The collections are split 75% men’s shoes, 25% Women’s. Retail prices range from 100 – 150 Euros. Each part of the footwear collection plays with the denim theme. The brand logo also frequently makes an appearance. The women’s collection, according to Krug, has great untapped potential in Germany, Austria and Switzerland. G-Star Raw works in the shoe sector with around 200 customers, including shoe retailers, department stores, boutiques and online vendors. Krug predicts 800-1000 customers in these countries alone.