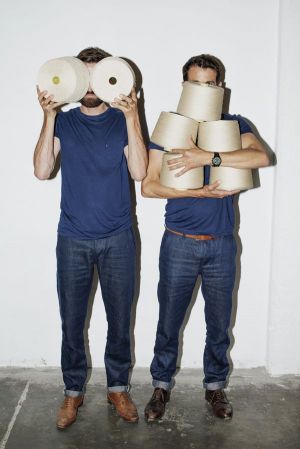 by Maria Hunstig — September 02, 2014
Freitag, the Zurich-based brand which turns used truck planes into a variety of (messenger) bags is launching a small range of apparel, made of their self-developed, biodegradable textile material ‘F-abric’. It was introduced during a press event in the Freitag headquarters last Friday. 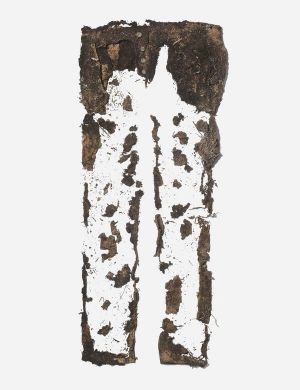 Half-time: A pair of F-abric pants from the Freitag rooftop compost (photo: Oliver Nanzig)
About five years ago, the Freitag-founders, brothers Daniel and Markus Freitag, had the idea of introducing a sustainably produced line of workwear for their employees but couldn’t find anything suitable in the market and therefore decided to develop their own fabrics and clothing. Their goal was to source all fibers and manufacturing from no further away than max. 2,500 km from Zurich and come up with garments which are 100% biodegradable on a compost heap.

After hiring a textile engineer, a designer and a sample seamstress and carrying out several ineffective trials with different fibers, weavers and manufacturers, the Freitag brothers finally came up with a result. F-abric employs flax (linen) and hemp fibers sourced in France, Holland and Belgium as well as modal fibers made from Austrian beech trees; the yarn is spun in Slovenia, Italy and Tunisia; fabrics are woven in Italy respectively knitted in Portugal and the final styles are sewn and washed in Poland and Portugal. To ensure the complete biodegradability of the final garments (they decompose within ca. three months in the compost), even details like the Tencel sewing yarn are made from natural resources and the pants buttons have a patented screw closure so they can be removed and used with another pair of pants.


The first line of F-abric consists of a pair of men’s pants in three colors, a men’s and women’s Henley and short-sleeved t-shirt, each in four colors and a women’s bib dress in two colors. The styles will be sold from October 31, 2014, in three to four own Freitag stores within Europe. Freitag is also currently looking for 4-5 multi-brand Freitag retailers to extend their portfolio by Freitag clothing.
Retail prices have not been named yet but accoring to Markus Freitag, they will range on a similar upmarket level as one is used by the Freitag bags.


“We don’t see Freitag as a fashion brand and as with our bags, we will not introduce products in season cycles”, said Markus Freitag. Instead, the line as well as its distribution shall grow organically.

Freitag bags are currently available at 10 own Freitag stores (Zurich, Berlin, Shanghai, Tokyo and Vienna, amongst others) and a selection of 450 retailers worldwide.