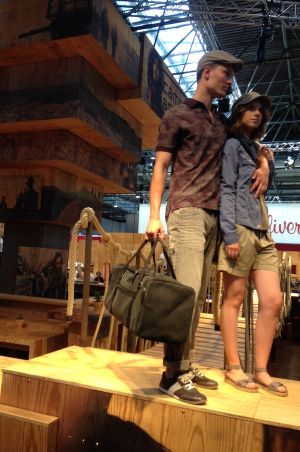 by Lisa Dartmann — July 30, 2014
When the new GDS – global destination for shoes & accessories - concept opened its doors at nine in the morning today, the atmosphere in the halls was exiting. Some exhibitors where nervous but most of them where in a good mood and gave positive feedback. “The visitors have to newly find their way around“, said Karl-Heinz Lauterbach, Marc O´Polo Footwear. Because of the new hall structure and need for orientation the fair business started a bit later later, but after two hours the aisles where filled and all important buyers were spotted. 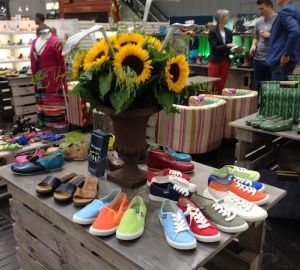 Flowery booth decoration
The new concept with the theme worlds Studio, Highstreet and Pop Up got positive response. Openly designed booths, nice decoration and some hot sports like flowers and coffee bars in the aisles were received well. Camel Active debuted with a catwalk show on a spectacular stage at their booth.
There was much more action and excitement in the halls, the quality standard was high and everything was well organized. „The fair looks much better, we are happy“, said Bernd Hummel of the Bernd Hummel Holding (Kangaroos, Flip Flop).
In the opinion of many exhibitors, the new earlier date was a good decision. Rolf Huigen, Clarks: „The new concept needs a chance. We cannot finally judge it after only one edition.“
For newcomers such as Replay the new GDS is a success. Timo Soulis, Replay Footwear: „Right in the morning we registered a good frequency, we welcomed all important retailers on our stand and they were in a good order mood". Also Palladium had its comeback in Düsseldorf and was happy with the excellent service and frequency. Ordering was a big topic on the fair, this was also confirmed by Daniela Engelke of Fritzi aus Preussen. For the bag and shoe brand the GDS is the most important fair. 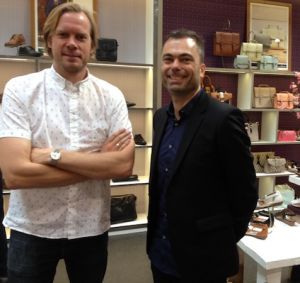 Auke van Alberga and Rolf Huigen of Clarks
At the Berlin shows, retailers were able to get an overview and in Düsseldorf they are now placing orders. Of course one will have to wait how the results turn out at the end of the fair. But the new concept is GDS' only chance to position itself as a kick-off event. The earlier date is very important because there is still budget.

More than 900 companies are presenting their brands at the footwear trade show untill Friday, August 1. The official Grand Opening of the fair took place on Tuesday evening at the Schwanenhöfe, accompanied by the portrait exhibition „Dancing Shoes“ by photographer Gerrit Starczewski and special guest Beth Ditto of US band Gossip.