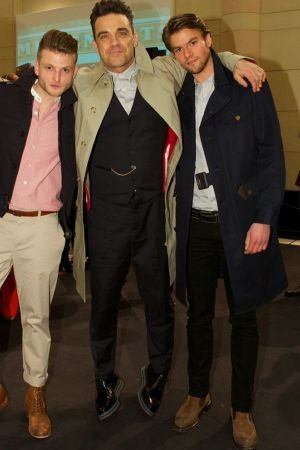 by Sabine Kühnl — February 28, 2013
After Italy and the UK Farrell, the menswear brand by British pop star Robbie Williams, has now officially began distribution in Germany.

The entertainer visited Berlin to open the first shop-in-shop at premium department store KaDeWe and to talk to consumers, fans and press for an exclusive meet & greet where he also revealed further plans for his brand, commenting "First, we want to do menswear correctly. I definitely say yes to womenswear and kidswear though", maintaining that top priority is to set up a proper infrastructure for the menswear.

Regarding further expansion in terms of licenses and own stores he and Farrell's Creative Director Ben Dickens kept quite cautious as well "There is no plan for doing licenses, as we want to keep control of everything we do. To open an own Farrell store it takes a lot of money. For now we focus on the strong partners in each country such as KaDeWe in Berlin".

Apart from KaDeWe, Farrell for now in Germany will be exclusively available in three more Karstadt department stores (Hamburg, Duesseldorf and Nuremberg) as well as at a handful of retailers in the UK (Selfridges, House of Fraser), Ireland and Italy.

Soon presentations at trade shows are on the agenda, but are, as of yet, unspecified.

Williams launched Farrell with the A/W 2011-12 collection. It is named after his grandfather Jack Farrell and is dedicated to traditional English style with a modern twist. The full collection consists of approximately 50 pieces per season, and prices range from 80 GBP (92 Euro) for shirts and 95 GBP (110 Euro) for denim up to 500 GBP (578 Euro) for coats.