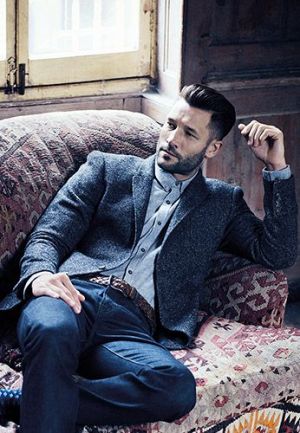 Look from the Farrell line sold via Primark
Stories

Farrell: From Savile Row to Primark

by Maria Hunstig — November 18, 2014
Under the headline “Don’t trust a man who doesn’t eat his pudding”, Robbie Williams' clothing line Farrell will be exclusively sold at selected Primark stores from Thursday, November 20.

Singer Robbie Willians launched his fashion brand together with designer Ben Dickens (formerly working for Burberry) with the fall/winter 12-14 season. Back then, Farrell’s contemporary British menswear was stocked at Europe’s top class department stores such as Selfridges, House of Fraser, Coin or KaDeWe, and especially prided itself with its “Savile Row quality” (read our former interview with Williams here).

The company went into liquidation and filed for voluntary bankruptcy as of Monday, October 14, 2013. British entrepreneur Peter Jones then joined in “to help build Farrell into a global fashion brand”.

Farrell's men's line that will be sold via Ireland-based fashion discounter Primark consists of shirts, tees, jumpers and sweatshirts, jackets, trousers as well as shoes and accessories, retailing between €8 (t-shirt) and  €52 (peacoat).