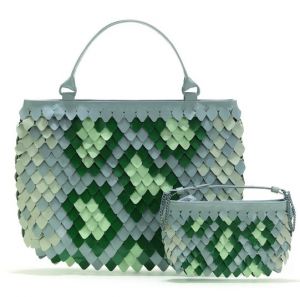 by Maria Cristina Pavarini — April 13, 2011
Within Milan Design Week (April 12-17, 2011), Swiss eco-minded bag and accessory brand Freitag has celebrated the opening of its first Freitag Reference pop-up store inside the iconic 10 Corso Como location, as part of a series of initiatives aimed at spreading the brand’s visibility and distribution worldwide.

The pop-up store – open until May 22 - is selling a special edition of the Fake Snake limited model bag covered with hand-assembled parts of recycled truck tarp (the only material all Freitag bags and accessories are made with) on the bag’s surface.

A few more prestigious stores are involved in a similar cooperation: Vestibull in Zurich, Pass the Beton in Tokyo, Haleluja in Brussels, and the Freitag Store in Vienna that was opened about two weeks ago.

Markus Freitag, co-owner and co-founder of the brand together with his brother Daniel, has announced other international expansion plans. The company will open its first flagship store in New York, Soho, by early May of this year, adding a new international spot to the already six existing ones in Zurich and Davos (Switzerland), Hamburg, Berlin and Cologne.

Furthermore, the product offer will be enlarged by launching two new styles for young women by November 2011 and a third one in 2012, plus a new unisex backpack model in early July 2011. The Freitag brand is already offering two main product selections: Freitag Fundamentals is the brand’s widespread collection including mostly unisex styles sold by 350 upper streetwear specialists worldwide; and Freitag Reference which is a man’s and woman’s line of more refined and elaborate models launched a year ago and sold worldwide in 30 prestigious fashion and accessories stores. Future aims of the company are to increase their client portfolio in both product ranges by about 20%-30% per year. In 2010, they sold about 255,000 bags and expect to sell about 300,000 items by the end of 2011.

“I’m so enthusiastic about the success that Freitag is having in Italy,” commented Markus Freitag referring to the fact that, apart from the brand's home country market, Switzerland, Italy is - together with Germany and Japan – one of the brand's major markets. “I didn’t expect such appreciation in a country that is already offering such a variety of products and brands in the accessory segment.” Nevertheless, according to Freitag, the company wants to further grow in all countries where the brand is already sold as well as in new ones like Scandinavia, France, the US and the Netherlands.