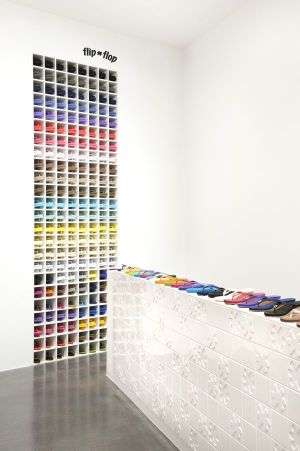 The Originals shelf in the new Cologne-based store
Stories

by Maria Hunstig — May 04, 2012
On Wednesday, May 2, fashion and footwear brand Flip Flop opened a shop on Cologne’s popular Ehrenstraße. The 100 sqm space is Flip Flop’s third mono-brand store and follows locations in Amsterdam and Berlin. 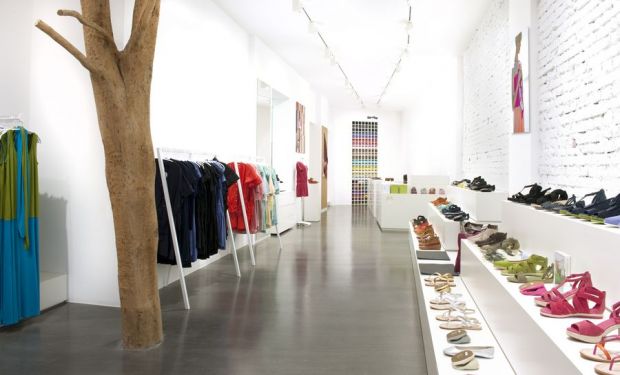 The shop's bright interior
The store concept and interior design was developed by Flip Flop’s Managing and Creative Director Anne-Katrin Hummel and the Cologne-based agency Cliquers.
In a light and friendly atmosphere the shop combines bright white surfaces with wooden elements. Highlights include an exposed brick wall that's been painted white as well as a real tree trunk that reaches the ceiling. Hummel explained, “Each of our stores was built according to a different concept, but they all have similarities such as the cubic furniture, our Originals shelf and a wall of white tiles featuring the Flip Flop flower logo.” 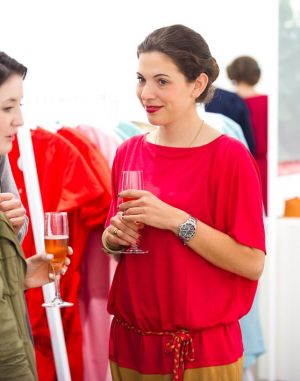 Creative Director Anne-Katrin Hummel at the opening event
Alongside the original eponymous rubber sandals, which are available for men, women and children, Cologne's new Flip Flop store hosts the full Flip Flop collection of women’s footwear, bags and accessories plus a range of colorful dresses, blouses and shirts.


To commemorate the store's opening, Flip Flop hosted a so-called “pink party” attended by Hummel, her father Bernd - owner of Bernd Hummel Holding - and her sister Julia, who also works for the family business. In his opening speech, Bernd Hummel expressed his great satisfaction with the new store and especially thanked the architects responsible for its design.
Anne-Katrin Hummel confirmed that further expansion was planned for the future, although dates and locations had not yet been decided.


Flip Flop was founded in 1998 in Pirmasens in the German state of Rhineland-Palatinate. The company currently employs around 25 members of staff and releases two main collections per year. These are sold in around 250 shops and department stores around Germany, amongst these KaDeWe in Berlin or Ludwig Beck in Munich.