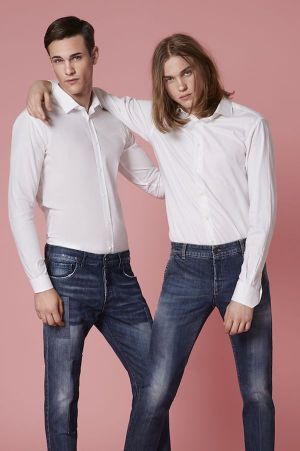 by Maria Cristina Pavarini — April 10, 2017
Made in Naples (Italy), Entre Amis, a men’s trouser brand, wants to speed up its growth. From September 2017, they will open a series of shop-in-shops at La Rinascente in Milan, Florence, Rome, and Palermo and will also start selling in France and the UK.

The brand, born in 2010, is already successful in Italy which accounts for 75% of its sales, followed by Japan, where it is recognized as the third bestselling trouser brand for men. Other successful markets (by importance) are Benelux and Scandinavian countries, Germany and Spain. Also in these markets they aim to increase their performance.

Entre Amis, whose name means “among friends” in French, was founded and is managed by its owners, brothers Antonio and Angelo Casillo. It offers a 150-piece trouser collection that is highly appreciated for its great quality, fits and very profitable price-quality ratio as it is sold between €55 and €85 wholesale. It is very successful in Italy where it registers 75% of its sales, while 25% come from abroad. Entre Amis is selling to a total of 800 stores worldwide, including 500 top Italian multibrand boutiques.

During the last three seasons, they also started their own new Officina Del Denim selection of denim chinos and five-pockets, also entirely manufactured in the Naples manufacturing district, employing Japanese and Italian top quality fabrics. Denim represents a significant part of their sales as they account for 30% of their sales and are constantly growing.

The company will close 2017 registering €8.5 million sales, 18% more than in 2016 and is constantly reinvesting its earnings. It enlarged its own headquarters in Nola, near Naples, doubling its size reaching 7,500 sq. meters. They bought new highly valuable ironing machines in order to guarantee a better appearance of their products. They also embedded hidden RFID technology in their trousers in order to avoid parallel distribution.

Among future plans, they might also start offering a capsule of women’s trousers, from where their expertise originates as they started producing a women’s total look, and eventually open a specific shop format selling their own selection of bermudas and beachwear, under the name – Coroglio By Entre Amis (inspired by a renowned Neapolitan cool beach) - in order to gain international visibility through most prestigious summer holidays resorts.