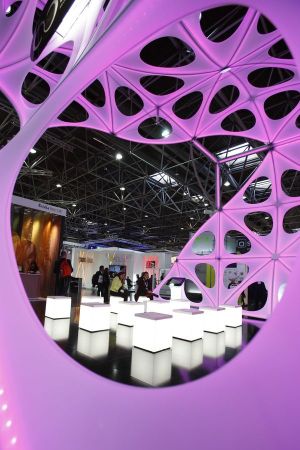 by Alexandra Spiegel — July 30, 2014
Retail design fair Euroshop, hosted by Messe Düsseldorf, will launch a new trade show called C-Star in Shanghai, taking place from 13th to 15th May, 2015. Euroshop will previously introduce its new concept during Chic Shanghai from 18th to 20th March. The C-Star concept features solutions and trends in retail.

The cooperation between Euroshop and Chic includes a lounge by C-Star on the Chic grounds presenting creative and consumer animating floor concepts for shops. At the same time Chic will host a 'Fashion Future Link' area to show omni-channel innovations for fashion brands and the POS.

The two trade shows have also united for the Fashion Retail Future Award, which will be celebrated at Chic Shanghai in March 2015. A jury including experts from the EHI Retail Institute and Chinese trade associations will choose the best retail stores. The winner’s store concept will be exhibited at C-Star.

With its 109,000 trade visitors from 110 nations, Euroshop represents the worldwide biggest trade show for the retail industry. Chic registers 100,000 trade visitors and 6,000 retail brands, making it one of the most important fashion trade fairs in Asia.