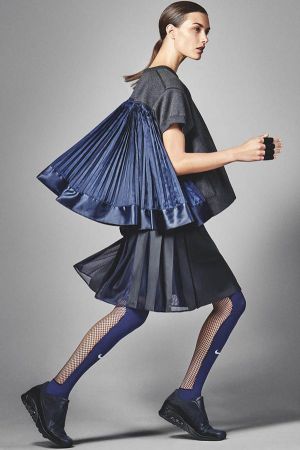 by Maria Cristina Pavarini — July 17, 2015
The Musèe National du Sport of Nice, France, has recently inaugurated the exhibit “En Mode Sport” that will remain open to the public until 20 September 2015.

The exhibit presents the evolution of sports apparel from end 1800s until today. Focus of the initiative is to show how sport-related dress codes have influenced daily life and upmarket fashion and how they became an integral part of urban culture.

The exhibit is subdivided into four main sections. The first part of the exhibit presents the early years when sports apparel started making its first steps from 1840 to 1940 and when athletes wore the first comfy-elegant apparel pieces as Chanel’s comfy knitwear items or René Lacoste’s iconic candid polo shirts.

A third section concentrates on the evolution of urban apparel, the birth of streetwear and how sport has become a fundamental element of daily life from the 1980s onwards.

A fourth section analyses how sports apparel has influenced and contaminated haute couture and pret-à- porter in terms of design, silhouettes, new materials and performance, starting from the 1990s.

The exhibit is hosted inside the Musée National du Sport in Nice, a museum that hosts a huge collection of about 500,000 items including documents, apparel pieces, trophies, vintage sports gear, mascots, movies, paintings, photos and archive material. The museum was founded in Paris in 1963, but has been moved to its current location in Nice in June 2014.