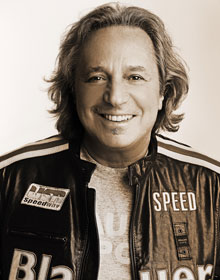 — February 11, 2010
Carlo Rivetti and his sister Cristina, the owners of Sportswear Company S.p.A. (Modena area, Italy) and its brands C.P. Company and Stone Island, have sold the casually sophisticated C.P. Company to another Italian company based in the Veneto region, FGF Industry S.p.A. The company, owned by designer-entrepreneur Enzo Fusco, produces and distributes brands such as Blauer USA, BPD, Design by Enzo Fusco, and Sweet Years.

Said Rivetti: “C.P. Company is the leading brand of a certain type of informal dressing; it has signified a lot to me and to my company. Two are the reasons for this decision: I strongly believe that it is now time for me to concentrate strengths and resources on one brand only, and that is Stone Island. With Enzo Fusco and his company on the other hand, I know I found the person and the structure able to grant the development of C.P. Company in full respect of its identity.”

Fusco added, “The C.P. Company brand has always represented to me one of the highest expressions of the informal way to dress. I am well aware of its history, I have known and know the people who determined its success. The accordance between me and Carlo Rivetti made it possible to reach to this agreement in short time. This acquisition is an important milestone in the development strategy of FGF, a company that, despite the current difficult times, is acknowledging constant growth. I am conscious of the challenge I have taken and strongly wanted, I wish I will keep to it.”

The agreement between Rivetti and Fusco states that the brand will be handed over in time for the S/S 11 season. For the first year, the collection will focus on the men’s and kids' lines. The company may resume its women’s collection at a later date. The new owner’s intention is, nevertheless, to maintain the present partners in worldwide distribution as well as maintain as much as possible the same production partners, including its dyeing facilities and product manager.

The relaunch of the brand will conjugate a modern approach while keeping an eye on its very unique and distinguished identity and heritage. Fusco, in buying C.P. Company, has also acquired the 20,000-item historical archive of the brand founded in the early 1970s founded by Massimo Osti. “If I had not been able to buy the brand’s archive I would have not bought it at all,” he said.

Unions in the Modena area, meanwhile, have strongly objected to the new agreement and are trying to negotiate packages for about 50 people who will be losing their jobs.