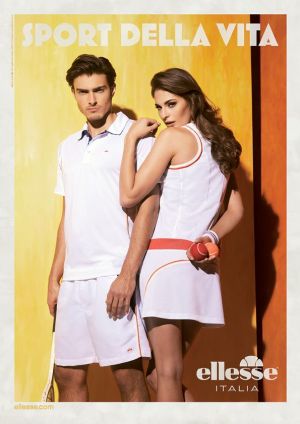 ELLESSE IS RELAUNCHING IN THE USA

by Christopher Blomquist — October 11, 2011
Iconic tennis brand Ellesse is swinging back into North America. Set to relaunch in the US in the fourth quarter of 2011, the sportswear label with Italian origins is returning to the North American market thanks to a recently inked licensing deal between brand owner Pentland Group Plc of the UK and Ellesse (North America) Inc, which now has the master license for the brand across all categories in North America.

Tennis champ Chris Evert is a shareholder in the new venture and will serve as brand ambassador. She will be actively involved in design, promotion and marketing and eventually help develop a capsule collection called Chris Evert for Ellesse.

While the initial focus will be on tennis-themed apparel, which will start shipping in time for holiday with the full collection debuting in the first quarter of 2012, the company also plans to expand and offer apparel and shoes for other so-called “lifetime sports” such as fitness, skiing, golf and equestrian riding. Shoes will begin to ship in the fourth quarter of 2012.

A series of standalone stores is also being planned. The first will open on Manhattan’s Upper East Side at the end of 2012, with another 24 to be added in places such as Connecticut, Florida, Texas, Colorado and California over the next five years. An online store will also be opened.

The management team for the new company includes CEO Byron Hero, formerly of Danskin and Ciesse, CFO Joseph Quinn, formerly of J. Crew and sporting goods retailer Modell’s, and President Carolyn Siskovic, who has worked at the NBA, Nautica, Ralph Lauren and Nike during her 15-year career.

Ellesse, which takes its name from the “L” and “S” initials of its founder Leonardo Servadio, began in 1959 in Perugia, Italy. With sales of more than $400 million, it was the second largest apparel company (after Benetton) in Italy in the 1980s and 1990s. It has sponsored such well-known tennis players as Evert, Boris Becker and Anna Kournikova during its history.