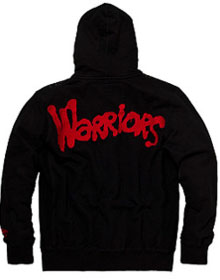 ECKO TO RELEASE “THE WARRIORS” COLLECTION

— November 06, 2008
Marc Ecko is celebrating the 30th anniversary of the 1979 cult film, “The Warriors,” with a limited edition apparel line.

The film traces the history of the New York gang from its home turf in Coney Island to its fall after being framed for killing a rival gang leader who tried to unite all gangs in the area.

Says Ecko, founder and Chief Creative Officer of Marc Ecko Enterprises: “When we started talking with Paramount about paying tribute to the movie, I kept hearing the clinking of bottles in my head and the classic line, ‘Warriors … come out to play.’ Just as we were incredibly successful with our limited edition "Star Wars" collection, I knew "The Warriors" line would also appeal to a broad range of fans who have kept the film alive all of these years.”

The collection will consist of four T-shirt designs and a hoodie, set for release tomorrow, Nov. 7, at Macy’s, Dillards and specialty stores, as well as all *ecko unltd. retail stores and Shopecko.com.